I’m experiencing a somewhat random failure for a z-wave lock to update its alarm channel. It looks like it might be related to the invalid nonce ID described here: https://community.openhab.org/t/z-wave-nonce-id-invalid/91155, but I’m not sure and looking for an expert to confirm.

I’m using openHAB 3.1.0.M4 on Windows and a Zooz z-wave stick. The zwave binding also says version 3.1.0.M4. The lock in question is about 12 feet from the controller and has 15 neighbors including the controller itself. This is a Zwave device, not Zwave Plus.

What’s happening: I noticed my Schlage door lock item doesn’t always get updated when the lock is opened or closed. I actually have two locks and it happens for both. Curiously, I have only noticed this first thing in the mornings but that may be user bias. Some mornings it works fine, sometimes not. I don’t see anything happening during the night that stands out as something that would impact z-wave devices.

Here is the log for my lock on Node 22. The events happening at time point 05:19 are when I first manually opened the lock (should be event 2). The alarm channel failed to update. About 10 seconds later I manually closed the lock but curiously that event wasn’t captured at all and again no update. I do see a “No valid NONCE! null” error in the log there.

At 5:28 I again manually open the lock (event 2) and then close it again (event 1). This time it worked and the alarm item was updated. No nonce error. 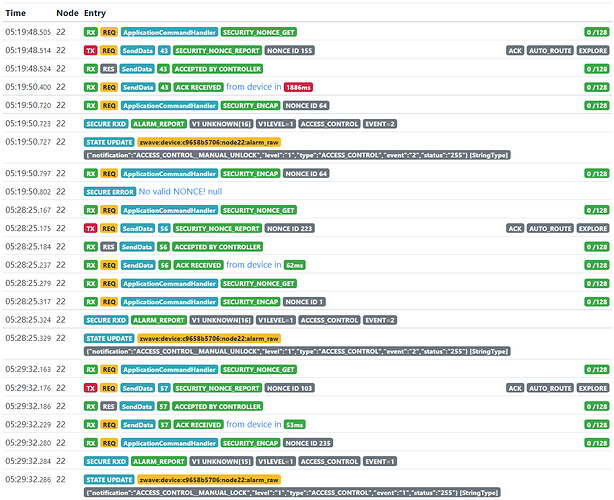 Is this a known issue, and is there anything I can do to fix this? Perhaps it was fixed in a later binding version but I have not been able to confirm that. Any help always appreciated.

Hi Community – just hoping someone with more knowledge can help out. I’d like to know if this has been addressed in an update to the binding, if it’s something I could possibly be doing, or if there are any known hacks to get the Schlage locks from exhibiting this behavior. Thanks again.

I don’t think this is a bug in the binding - it’s likely caused by communications issues between devices. When using security, there are multiple commands that need to be sent quite closely together and if a nonce is not available then the command can’t be decoded.

Thanks Chris for the explanation. Since my door lock rule never gets triggered by the alarm code changing when this nonce failure happens, I don’t know what to do differently to get around this. Is there a solution from my end?