I’m about to start with openhab. First of all I just don’t feel like having 5 gateways for every manufacturer so I’m planning to install zigbee to control ikea lights or xiaomi things. About this, the range of zigbee dongle is enough for a 100m2 house? Stupid question maybe.

Also want to confirm, any device controlled by Alexa can be managed through openhab right? Like a gateway.

Finally, I need to buy a raspberry obviously. Do you recommend getting the pi 4 for openhab or it’s too soon for an amateur-average user?

From what I understand, compatibility of Z-Wave devices is pretty much guaranteed but Zigbee devices may or may not work with a standard Zigbee network. Z-Wave is a little more expensive but it has less compatibility issues and is less prone to RF interference since it does not use the crowded 2.4GHz radio space.

Both Zigbee & Z-Wave are mesh networks with mains powered devices able to act as repeaters. Coverage therefore depends on your network layout in addition to the space needed to be covered.

I have tagged this Zigbee to hopefully ping our expert developer, Chris Jackson. He does both Zigbee and Z-Wave.

Thanks for your help! And the tag

Also want to confirm, any device controlled by Alexa can be managed through openhab right? Like a gateway.

No you can’t. You will need to use Preview and Beta: Amazon Echo Control to create things from amazon into openHab
This is quite good as some devices don’t have a native openHab binding and this way can be controlled by OH. BUT not the other way around. The amazon polling period is 10 minutes so don’t expect live updates of items controlled only via amazon. For example I have two “smart” wall socket for which exists an app and an alexa skill. Via the amazon echo control binding, I can turn them on or off but If I turn them on/off manually I have to wait up to 10 minutes to see the update in OH. Nevertheless it is quite exciting because devices like the Nest thermostat from which google (In their great wisdom) stopped the public API will be controllable via this binding with the amazon echo acting like a bridge.

On the other hand, MOST items created in openHAB can be controlled, viewed with alexa by using: https://www.openhab.org/docs/ecosystem/alexa/

For example I have two “smart” wall socket for which exists an app and an alexa skill. Via the amazon echo control binding, I can turn them on or off but If I turn them on/off manually I have to wait up to 10 minutes to see the update in OH.

Curious. I have an Amazon Smart Plug. I thought I had it in OH but I know when I controlled it with Home Assistant, the response was almost immediate. Definitely not a 10 minute delay.
I have been concentrating on Z-Wave but I should “dust off” my Amazon plug for testing.

A thing I’m confused about. You started saying I can’t control things through alexa but at the end you said yes.
I’m sure you are talking about two different things I’m not aware of.

I meant in OP like for example adding a socket to alexa, and that socket make a rule im OH that at xxxx event turn that socket off

I thought I had it in OH but I know when I controlled it with Home Assistant, the response was almost immediate.

Notice the minimum is 10 minutes
Because: Preview and Beta: Amazon Echo Control

A picture is worth a thousand words 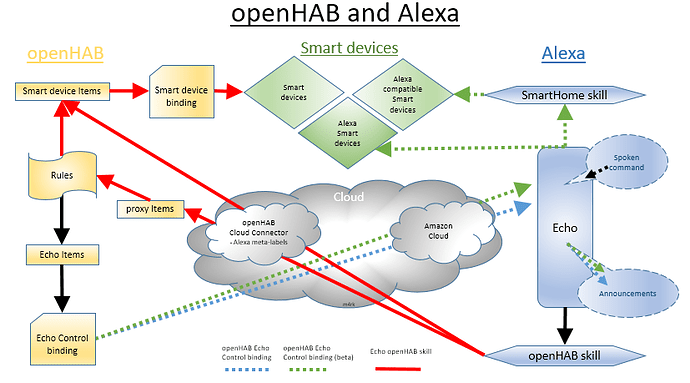 I meant in OP like for example adding a socket to alexa, and that socket make a rule im OH that at xxxx event turn that socket off

Yes you can do that. BUT if you turn on that socket manually, don’t expect openHAB to be updated for UP TO 10 minutes. So you can’t create rules that trigger on the plug being manually turned on unless you don’t care about the delay

Running OH on Pi is a good way to go, but if you want to start off slowly before making a bunch of purchases. You can run OH on any computer hardware to see if is what you want to proceed with.

Yes doing it that way will give you an almost instant response. It’s the feedback from devices that’s really slow.
For the Nest thermostat, I don’t mind a 10 minutes delay. We are talking about heating not lights.

About this, the range of zigbee dongle is enough for a 100m2 house?

Zigbee provides a mesh network. The more mains powered devices you have the better the network becomes. So it’s not so much the range between the coordinator and the devices as it is the density of the devices over that area.

According to the wikipedia, the expected point-to-point range is 10m-20m line of sight. That should be more than enough. When you add in the mesh nature of the technology, you can have up to 5 hops between a device and the coordinator (according to a few postings I’ve seen) which would give you a range of 50m-100m from the coordinator to the farthest device, assuming you have a string of mains powered devices every 10m-20m along that path.

You should not have any problems with range. Though stuff like thick masonry walls or lots of interference will impact the range.

Zigbee devices may or may not work with a standard Zigbee network.

It’s really those devices that we know use Zigbee but don’t claim to be Zigbee that cause problems. In those cases the companies add “stuff” to the protocol that may make some of their capabilities unusable from the pure Zigbee standard. If they have the Zigbee logo on the box, they should be fine.

Has it been announced that Nest will support Alexa? The last I heard that wasn’t done nor guaranteed. But I stopped paying attention when I decided to replace my Nest instead.

If they have the Zigbee logo on the box, they should be fine.

I wish this was correct. But I have a Trust motion sensor which has the zigbee logo, and is suppose to be fully zigbee “compliant”. Unfortunatly this has been a pure hell ever since I bought this device for testing. It has been working on/off. (mostly off). Sometimes in short periodes and sometimes in longer. One thing has been stable. It will stop working sooner or later.

When I said “should be fine” I was referring only to the compatibility with other Zigbee devices. Even with Zwave one can end up with a crappy device that doesn’t function correctly. But that has nothing to do with it’s compatibility with the protocol.

In those cases the companies add “stuff” to the protocol that may make some of their capabilities unusable from the pure Zigbee standard.

Correct, and Z-Wave does not permit that.

Got it know, thanks! @vzorglub

@anonymous.one Yeah I thought about it, I might be testing a day or two with some device through OH in Windows.

About ZigBee network got it now @rlkoshak . I will have lots of GU10 ZigBee lights all over the house, like 20+ (Ikea ones most likely) so good to know about zigbee being a mesh network.

Z-Wave can and does prevent anyone from using the Z-Wave logo on a device that doesn’t conform to the spec. Zigbee does too. But unlike Z-Wave which has been a proprietary protocol for most of its existence, Zigbee is a more open protocol (i.e. documented and you can therefore buy transceivers on the open market). This allows companies to take a standard Zigbee stack, add their own proprietary stuff to it and they can sell it. But they can’t call it Zigbee.

Of course, it would be a more consumer friendly choice for companies like Xiaomi to use standard Zigbee in the first place, but that’s an entirely different discussion.

But how to tell if it´s a crappy device or a software issue (coordinator end)?

If all features of the device function at least part of the time or appear available (i.e. have Channels) than it’s a bad device. If there is something that the device is supposed to do but there is no Channel listed to make it do that, it’s not using strict Zigbee and has added something to the Zigbee. I’m sure looking at the trace or debug logging for the Zigbee binding will tell you a lot as well.

@Rachdingue heh…I have had times where it has taken me a day or two to just get something added to OH. Little history behind this comment, I discovered a flush relay Zwave device could be hooked up to my garage opener (lot smaller and cheaper than other name brands). Took me 3 days after work and a lot of ladder up/down movement before I finally nailed the wiring…took another couple of hours to figure out you have to set your Zwave controller into inclusion mode as the flush relay boots up in inclusion mode for a few seconds…but since I learned this hard hard lesson, I was able to install the same one for a friend and did it in less than an hour.

I suggest giving it a week or two as you keep finding new ways or things to try out with OH, I tried Node Red out a few months back and while I’m still working on some logic its forced me to think of new ways to accomplish things.