Now that the OH 3.1 version has been released, I think it is time to open a new thread that is dedicated to the OH 3 version of the Sony binding.

This binding has been originally developed by @tmrobert8 for OH 2 and is extensively discussed in the thread Sony Devices Binding. Since start of the development in 2016, it has evolved to one of the most powerful openHAB addons that is characterized by its support of a large range of Sony devices in combination with a high level of auto-discovery of the device capabilities.

For various reasons, the binding hasn’t been merged into the official addons repository yet. One of the consequences is that the migration of the binding code to OH 3 hasn’t been performed by the OH maintainers when OH 3 was released. This was the motivation for me to try to migrate the available OH2 code by my own when I started my OH journey in January 2021. In course of this work, it has turned out that I also had to implement some tweaks and fixes to get the binding work nicely for my Sony TV. Also, I’ve tried to address other issues that were reported by users in the OH2 thread.

With opening a new thread, I’d like to provide a consolidated place for downloading the OH3 binding version from my personal github account and for reporting and discussing issues and further enhancements.

Please note that my contribution to the overall binding code is still rather marginal compared to what the original author @tmrobert8 provided. He gave same valuable hints when I started with the migration, but since than has been inactive. Of course, in case he becomes active again, I would be more than happy to collobarate with him in maintaining the binding. Thus for the time being, the support from the community is important to compensate my limited knowledge of the code (escpecially regarding certain non-obvious implementation solutions) and my testing capabilities.

Regarding the future of the binding, my original intention was to get the binding part of the official addons repository to ease the distribution, installation and maintenance. However, my current preference is to publish this binding on the new market place that has been announced forr the OH 3.2 version coming end 2021. I could imagine that this would be the less stressfull and faster alternative.

The latest binding version for OH 3.1 (stable verions) and OH 3.2 can be downloaded from my fork of the addons repository: 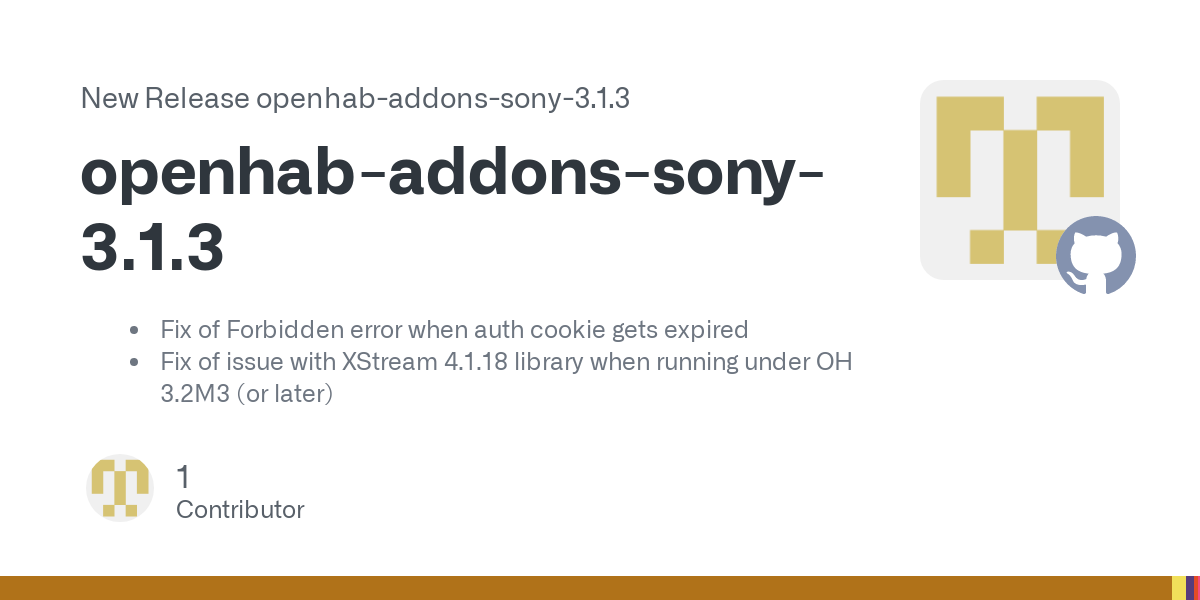 Fix of Forbidden error when auth cookie gets expired Fix of issue with XStream 4.1.18 library when running under OH 3.2M3 (or later)

Starting with OH 3.2M3, the binding can also directly be installed from the community marketplace. In this case, no further manual installation steps are required

The code is based on the latest released OH 2.5 binding version (see Release 2.5 12/01 #2 · tmrobert8/openhab-addons · GitHub) with following major changes:

Installation
Not required if installed via community marketplace!

The installation procedures is nearly identical to the OH2.5 version:

The mainly unchanged documentation in form of README files can be found here:

To get the binding logging into a separate file, edit the file userdata/etc/log4j2.xml as follows:

The logger entry for PhaseInterceptorChain supresses warning messages in the openhab log when Sony devices are unreachable. I haven’t yet found a way to avoid these warnings in the code.

It is highly recommended to disable the source feature of the binding as it tries to connect to github in short intervalls to get thing definitions from a library. I think I will delete this feature an in upcoming version as it seems to be obsolete.

Also you can define wich services (represented as things) should be auto-discovered by the binding.

The according settings are done in `services\runtime.cfg’ file as follows:

Seems I am the first in this new thread

I have migrated from OH 2.5 to OH3.1 and I am trying to use Sony Binding for BRAVIA KDL-55W829B (with SimpleIP thing and Ethernet connection (eth0) .
1- With Parameters:
Refresh Interval = 5
Retry Polling = -1
Status Check Interval = 30

When I switch ON the TV via remote control the Simple IP still stays in COMMUNICATION ERROR but the sony binding recognizes that TV was switched ON since the new thing appeared in the Inbox:

Now when I click DISABLE then ENABLE the SimpleIP thing changes immediately from COMMUNICATION ERROR to ONLINE.

When I switch ON the TV via remote control the Simple IP still stays in ERROR and there are logs as follows:

But sony binding recognizes that TV was switched ON since the new thing appeared in the Inbox:

Now when I click DISABLE then ENABLE the Simple IP thing, it changes immediatelly from COMMUNICATION ERROR to ONLINE.

Is there any recommended set up to make this working without clicking DISBALE/ENABLE on the SimpleIP thing?

Welcome to this thread

and thanks for your issue report.

Regarding scenario 1: What happens if you power on the Sony TV from OH via a Simple IP command (this should work by using WOL)?

Regarding scenario 2: I think I’ve found the cause of the issue in the code and will try to fix it shortly.

Yes WOL works in Scenario 1, TV is turned ON, Sonyscalar added to the Inbox, but the Simple IP thing remains in OFFLINE/COMMUNICATION ERROR

Hence no possibility to turn OFF the TV in OH.

I’ve released a fix for the ‘no protocol’ error:

Please let me know if this fix works for you.

Thank you for the new binding jar. There are positive changes

Scenario 1
(1.1) When I turn on TV in OH, the TV is ON then ~20 sec later SimpleIP thing changes form OFFLINE to ONLINE. Log below:

(1.2) But when I turn on TV via remote control the TV is ON, the sony:scalar was added to the Inbox but the SimpleIP thing remains in OFFLINE/ERROR with the message in UI:

Hence a question: OH recognizes the connection with TV since it added sony:scalar to the Inbox, would it be possible to make SimpleIP thing ONLINE as well (like 1.1)?

Scenario 2
TV is turned ON using both: remote control and OH. After sconds the SimpleIP thing is ONLINE

I think your observations reflect the expected behaviour.

If the TV is powered on outside OH using a remote control, the only way the thing status can be updated to ONLINE is via the retry polling mechanism. This is completely separated from the discovery process.

The retry mechanism is triggered when the TV becomes unreachable after it has been switched off and gone into a deep standby mode (seems to be after 5 minutes). The log just reflects the process of trying to establish a connection to the TV in order to update the thing status once it has been switched on.

Could you please have a look at the log below to find out if there might be any reason visible?

Thanks for the helpful log. I hope I will be able to provide an answer soon.

I can confirm that the reconnect logic works as designed (partly by me…). In the current implementation, a (re-) connect is triggered either after the configured retry polling (if set) or a fixed 30s period after a command has been sent to the offline TV.

I’m going to change this behaviour so that that the offline TV should become online right after sending a command (at least wihin 2-3 seconds).

Please note that it still might take a while that the SimpleIP service becomes available after powering on the TV due to the start-up/boot procedure (e.g. it takes ~15s on my TV that the scalar services becomes available).

After WOL the TV is ON (physically) in ~8 s but in Openhab UI it takes +30s. I can see new “not reachable” messages:

I would assume that the SimpleIP service becomes available only after a period of more than 16s after powering on. You could make an independent check by issuing a ping command and measure the time until a response is retrieved. If this is much less than 16s, I think I need to review my attempt to reduce the reconnection time. The current solution starts the first reconnect attempt 2s after a power on command is retrieved. Then this interval is doubled for each successive retry (i.e. 4s, 8s, 16s, 32s).

When TV is turned off, the time of ping result is 10,3s in my case.

Hi, thank you for the great binding!
I’m going to add my TV Sony 55X8500E, which is a smart Android TV into openHAB 3.1. The TV was detected as sony:scalar thing in openHAB, but I want to add it manually in .things and .items file.
So is there any official document of this binding somewhere, like this page SonyAudio - Bindings | openHAB
Thank you for paying attention!

You can find the docs here on my github page. Note that these are the docs for the original OH2 binding with some minor adaptions. I will check if these docs can be made accessible through the UI as for the official bindings.

If you have further questions please let me know.

Hey @andan,
i recently updated to 3.2.0 - snapshot. The Sony binding stoped working. is there an update for this atm? or did i mess somthing up with the update?

So if you use the 3.1.1 binding version, I’d assume that your issue is related to the update procedure and not the binding. In this case, you might try to clean the cache and/or restarted OH after the update. If the issue persists, please provide log information if possible.

clearing the cashe fixed it.

thanks for the binding

The binding found my TV but will not connect. The XML file from the TV is below.

Any other information I can provide to troubleshoot?