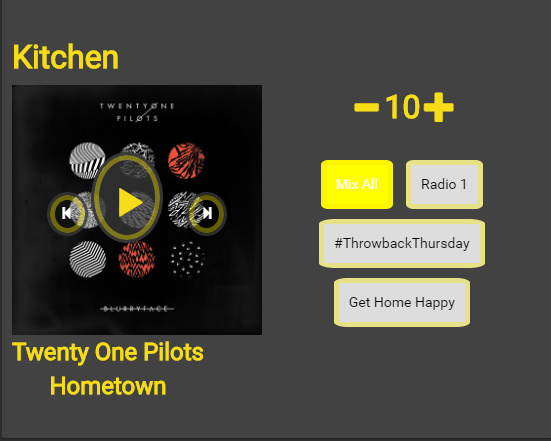 This widget has been developed for Squeezebox, but should work with any media control. You will need to update the PREVIOUS command in the widget code to suit your binding.

In the rules file you create your stations. URLs and Squeezebox MAC addresses need to be Encoded using something like https://www.urlencoder.org/ and added to the appropriate variables

Then load in the widget and configure with your items.

Although it seems to render well (ok, acceptably) on my laptop, it’s not so good on my Nexus 7. I’m a bit of a hack when it comes to CSS so I need to work (or have assistance on) the centering of the play/skip icons and making the circles round. I’m also not overly happy with the volume control or stations so will work on making that look a little bit better.
SqueezePlayer.widget.json (6.3 KB)

Took a quick look at your widget and found some errors you might want to fix:

all of your !important are outside the semi-colon

Although it seems to render well (ok, acceptably) on my laptop, it’s not so good on my Nexus 7

Nice posting. Some comments about the Rules (since I don’t know anything about HABPanel widgets I can’t comment there).

The Rule is nice and short. I like it. I do have some advanced things you might consider to make it even shorter and flexible. These are not necessarily mutually compatible nor necessary, they just might be something people wouldn’t consider trying.

kitchenPlaylist = Stations.members.findFirst[station | station.name = "Station_" + KitchenMusicPlaylist.state.toString].state.toString
You can add/remove/change stations by adding new Items following the DPs above to initialize them to the proper value without needing to modify this Rule.