The Tankerkoenig Binding developed by @dolic is now availabe on the marketplace.

At this point I have to mention @opus work for this binding. At least half of the effort was done by him

Great Job, currently i am moving my tankerkönig rule to the binding. It would be great if besides the fuel prices we could get some more information. Maybe a swicth that indicates if the station is open.

Could you elaborate what you want to do with it. Currently the mode Opening Times is build to get price updates only when the station is open. That probably doesn’t fit hundred percent, but I’m open for discussions (when I’m back from my holiday trip).

My current script takes the prices from six stations. In the sitemap these prices are dispalyed in a sorted order (lowest price first) so that i see anytime the cheapest station. If a station is closed i display “closed” instead of the price. With a flag and a proxy item i will be able to sort stations and diskplay if the station is closed. as far as i understand the Opening Times mode only changes the behavior of retrieving data, but doest give me any information.

Understood.
Currently I have a PR which needs only approval and merge from Kai. This one does incooperate an item that gives the “today is a holiday” information.
If that is merged I’ll put yours on top of my ToDo list.

That would be great.

Nice proposal. I would like such channel, too. Fits perfectly in my price alarm rules. If I could make another suggestion the channel should be fit a Contact item.

Could you file that as a feature request in the openhab2-addons section of github?

is now availabe on the marketplace

Would like to install the tankerkoenig-binding.
What I’ve found is the description UserManual>AddOns>Bindings>Tankerkönig-Binding.

How can I install the binding?
The marketplace-link from the first post of this topic seems to be dead.
In PaperUi>Add-ons>Bindings there is no tankerkoenig-binding available. 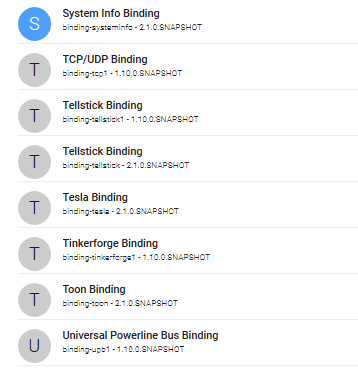 I found this link from New OH2 binding: Tankerkoenig ,
but I’m not sure if this is ok.

Can someone point me in the right direction? Thanks.

The Marketplace binding is removed since the official binding is part of the 2.1 stable release. What version of OH DO you have?

@Dibbler42 Should it be available in PaperUI>Addons>Bindings now? I still cannot find it there.

@cweitkamp, @Dibbler42
The requested channel is build in, could you test it? Github Link

Try to try it this weekend

Could someone point me in the right direction where to deploy the jar file?

I’m on an OpenHABian-system and have copied the .jar into the addons folder in the sys-share (i.e.: /usr/share/openhab2/addons).
You need to uninstall the Tankerkönig-Binding via PaperUI before doing that! The one in the addons folder will then be loaded automatically (probably after a restart, but I’m not sure on that)

Yes of course. I will need some days. Give feedback after that.