I have noticed on the home assistant forum that tplink have closed port 9999 for local controll of there sockets due too a security issue so they sent firmware updates making them no longer work with home assistant will the same happen too openhab?

Hi All, just wondering if anyone can assist me, I’ve got multiple tp-link HS100 and HS110 sockets (mainly version 2.1, but some below) which are working and connected fine with openhab 2.5.7 I added 4 sockets the other day (not realising they were a newer version - 4.1) and openhab found them automatically, then today i went to control the sockets and they were in a communication error state. I’ve since tried to add a further two sockets, but openhab cannot find them, I’ve tried to add them m…

So its a yes

Well, not all sockets (yet).
I have 2 HS110 which are still working fine.
I think i read somewhere that it might only happens to UK sockets. But i could be wrong.
Maybe there’s more info on the github links in topic i linked.

I deleted the kasa app from my phone fwiw.

And maybe this is worth a try:

If you’re trying to configure a TP-Link device on a Wifi without internet access, here’s how. Download the Kasa app to your phone. Go through the wizard normally, and when you get to network selection, tell the device to connect to your “internal” network. The device light will go blue to tell you it connected, but the app will say it failed (because the device can’t phone home to TP Link’s server). This is fine. You’re done with the TP Link app. Now, use whatever utility you have to find the …

Does this mean that the KASA will be no longer useable by OH in the future ?, I was going to start using these

If anyone has this problem. See this post about how to get a work around from TP-link: 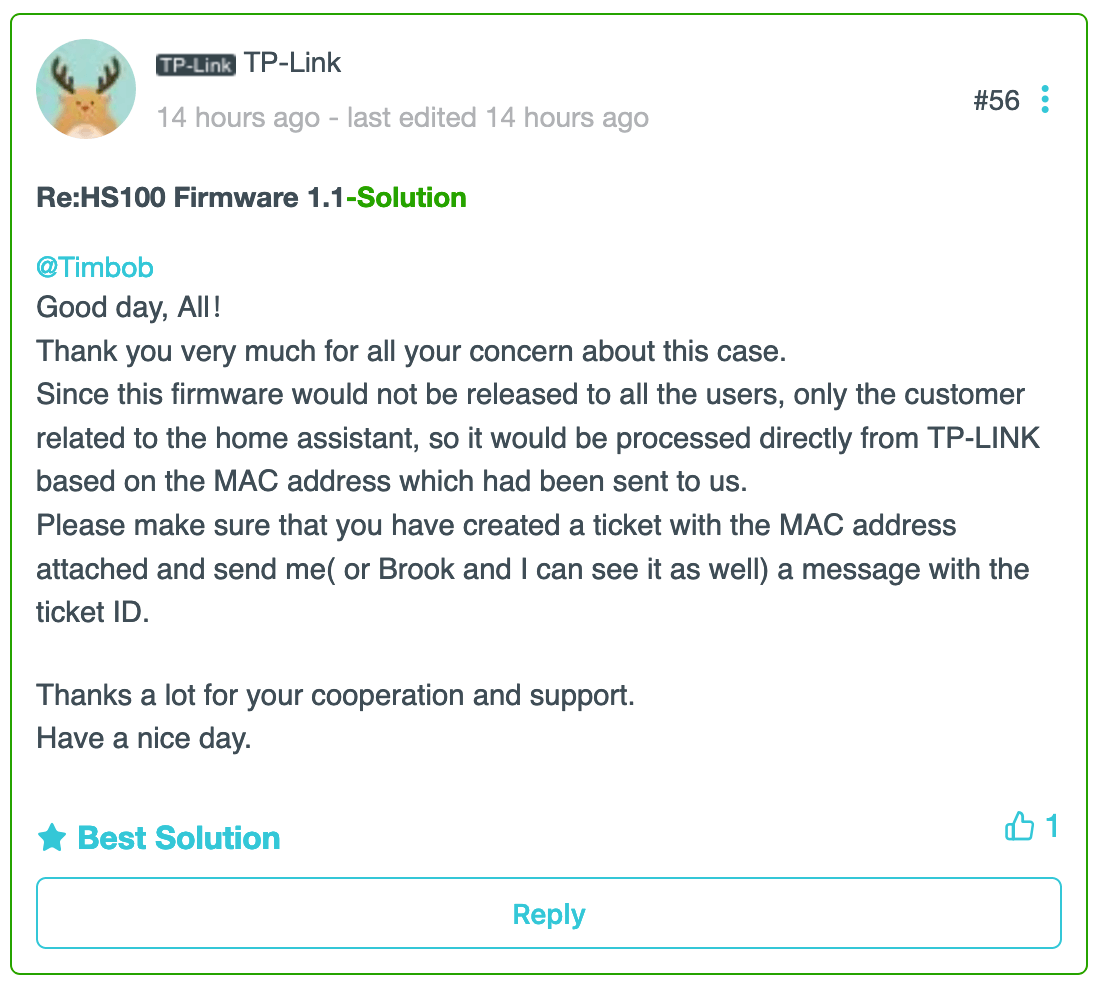 TP-Link last week decided to publish a firmware upgrade that removed access to the local API. They are partially reverting this decision.

@hilbrand, thanks for the heads-up.
It does appear that there has been some talk over on HA github pages about adding support for the new encryption protocol on these devices? https://github.com/python-kasa/python-kasa/pull/117
Just an FYI in case you were not already aware.

Has anyone else had issues with more than just HS100 and HS110? the TPLink forum posts seem to claim that the related firmware update is limited only to UK-sold HS100 and HS110 models. But my experience over the last few days is that in addition to HS100 and HS110 not working, now I have at least one of each models HS105, HS200, HS210, and HS220 not working. I have bought many of them on eBay, so it’s possible that they are grey market UK, but they are all USA plugs so I find this very improbable.
Everything that is not working seems to have TCP port 9999 no longer open

The weird part for me is that I do still have 1 x HS105 and 1 x HS210 still working from OpenHAB. NMAP shows them as having tcp port 9999 still open. But for both of those devices still working with OpenHAB, the Kasa app shows them as having identical HW and FW revisions to other HS105 and HS210 devices in my network which no longer are working with OpenHAB, and whose port 9999 show as closed in NMAP.

I’m pretty disappointed in TP-Link for this, although I work in software myself and I am sympathetic to the idea that sometimes stuff gets broken. I guess I’ll wait a bit to see where this goes, but at this point, the Shelly.cloud stuff is looking very attractive as a replacement for TPLink. Their stuff is cheap, they advertise an open and local API, and the single Shelly 1PM device I have has worked consistently for me so far…

Getting off topic here, but the name (Shelly.cloud) is deceptive. Read up a bit on their stuff. Shelly provides a local API, no cloud access needed. You can also reflash the ESP8266 inside your own firmware, or Tasmota, or whatever you like.

Update: I emailed both support@tp-link.com and USSupportTeam@tp-link.com late last night complaining that my stuff was broken. Per the guidance, I provided model #s, MAC IDs, and hardware versions.
Within 6 hours all my TP-LINK devices were working again with OpenHAB.

None of my devices appear to have modified firmware revisions in the KASA app, which is strange (and suspicious to be honest).

Also worth mentioning - I got an automated email back from TP-LINK immediately after sending the email confirming a ticket had been created, but since my devices started working again, I haven’t had a confirmation from TP-LINK indicating that my request for beta (or even ‘downgraded’) firmware was fulfilled. Sort of makes me feel gaslighted a bit, maybe it was something wrong on my side all along …

Well, I’m embarrassed now. My kasa devices are not working consistently this evening, several of them show dashes and are unresponsive.
I’m a little baffled as to why they all started working again this morning, though…

Give it awhile and contact support again maby its an issue with what they have done?

TP-Link support in the USA has been in touch, but they seem relatively unaware of this so far.

One excerpt from what they sent back to me:
“The security patch that broke the local API was form what we were told only in the UK, and as such the Beta firmware is exclusive to those UK versions of the products.”

However they took my devices info and said they would follow up with their systems team to see if they can verify that breaking patches were pushed to USA/Canada versions.

never updating them is not an option either

Kasas can be blocked from accessing the Internet, so that you only have control through openHAB. If you do that, then there’s no real need to update firmware (assuming they’re working fine).

I don’t have any HS110s, but my HS105s are on 1.5.6 firmware, with no updates available. Also, I don’t recall them ever auto-updating in the past. It’s interesting that the HS110s are different.

Brief update from my perspective on this thread.

All my TP-Link/Kasa devices have been working mostly well for the last month.
(There have been a couple of instances where they all lose their WiFi connections, but when that’s happened, almost all other WiFi devices [i.e. Chromecasts and Google Home displays] have also disconnected. I think those instances have been following schedule WiFi router reboots, so I don’t think those are Kasa issues.)

I still am not sure what caused these Kasa devices to become broken from OpenHAB’s perspective, but I am still a little concerned about continuing to invest in them. I’m starting to diversify with more Shelly devices.