Yep, it’s a major update so we need some volunteers for testing.
@christoph_wempe already did some testing while the changes were made.
Kudos to him for the early testing part.

I have reworked nearly all of our api connection parts, we have used in the past to access openHAB.
Until 1.0.0 we only had a workaround for connecting to the openHAB 3 api with an auth token.
This has been improved and you can now use a dedicated authToken setting for the extension.
It has also been improved in the backend side and the connection should work pretty stable with auth tokens now.

This is also the base for further improvements.
@ysc has started a work in progress change for a native OAuth workflow.
So we may be able to sign in directly through the extension without the need of generating authtokens manually.
Looking forward to this and will join his efforts there.

openHAB 2 should still work of course

Please test this too! The goal was to support openHAB 2 installations too ongoing.
So i would expect the extension to work with both major versions.

Complete refactoring of config parameters (This is breaking!)

Our extension is pretty old already and there where many changes on vscode side too.
I took the chance to refactor our config structure, which makes this a breaking change.

Thanks to the testing from @christoph_wempe and @ysc again.
I think we made the change as smooth as possible. 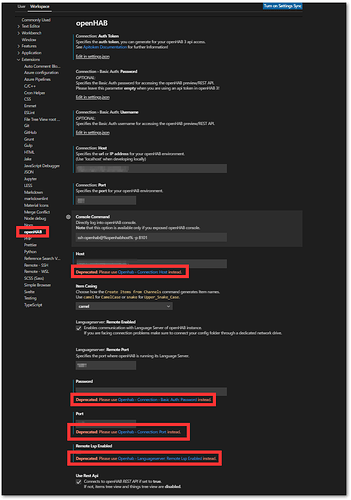 Several parameters have been moved or marked as deprecated.
I have introduced some logic to still use the old parameters.
This way the extension should work as known when you do the update.

Add a proper Update Notification in the future

I think this is already missing for a longer time.
“Hey i have updated the extension now, but what changed?”
Hopefully this question will be answered better with this update screen in the future.

I have introduced it as it’s own page and i have some things in mind to change after this release,
so we can reuse it for new updates or even other informations in the future. 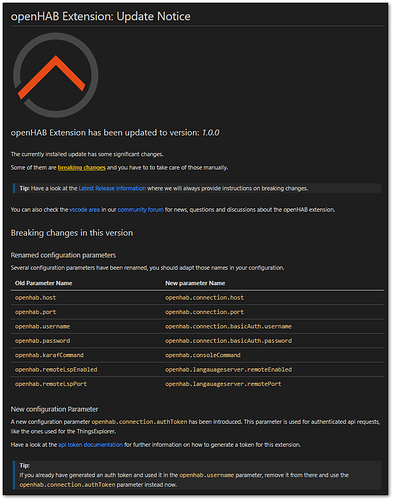 As always dependency updates and some fixes for a better presentation in the marketplace.

You can download and test it from our build pipeline

Small update with an improved output for the deprecated setting parameters.

Fixed a small bug in the deprecation check.

So far i just received some feedback from @mstormi and fixed/improved the topics he brought up.
For me this means => No big complains, so let’s go.

I will push the 1.0.0 update to the marketplace later.
Thanks to all downloaders and testers.

Short delay, sorry for that.

This release includes some breaking changes. Please check the update notice for detailed instructions. It will pop up, when you install the update but you can also show it anytime with Ctrl+Shift+...

Open VSX is a vendor-neutral open-source alternative to the Visual Studio Marketplace. It provides a server application that manages VS Code extensions in a database, a web application similar to the VS Code Marketplace, and a command-line tool for...

So far i just received some feedback from @mstormi and fixed/improved the topics he brought up.

I have 1.0.0 installed now but it keeps complaining about karafCommand. please check again.