Often when one encounters a problem with OH, particularly after an update, OH will refuse to run or certain parts of OH stop working. Some reported errors include:

The first step in debugging the problem is to clear the tmp and cache.

If you are running an installed OH (openHABian, installed using apt or yum):

EDIT: Reworked to use openhab-cli for installed OH and to delete the cache and tmp folders, not just their contents.

thanks for the Thread.
Could you please help a noob like me with the commands ?

dont want to break OH - Thanks

1 Like
Karaf.Feature issues after update to 2.3
After updating OH to 2.3 and Z-Wave Binding to 2.3 Danfoss Living Connect Thermostats sets OH, but OH does not set thermostats back
Insteonplm.cfg not working correctly
chrode (pmc) November 24, 2017, 2:57pm #3

Depends on the installation:

openHABian HowTo
if running OH2 on a Debian like Linux (openHABian being one of those), it’s done like this:

I got tired of retyping this so am posting a new thread I can link to later.

Is there any information available that explains / documents the bug(s) that require a manual deletion of tmp & cache?

The implications of randomly requiring a manual deletion of tmp & cache are dramatic when trying to automatically update OH as it will sometimes brick it. Deleting the cache & tmp on every update also seems to be troublesome as this requires re-downloading dependencies (bundles) that are stored in cache, which from my experience is also not very reliable and will lead (on first start after deletion) to a fast number of NotFound exceptions, thus forcing a second restart.

Is cache the same that is stored in the xml/java database? I had some issues that i had 2 entries for mqtt binding etc… when I checked in the karaf console. Is there a way to clear out all info in that cache/Db so it reloads it from the .cfg .items .rules .things file?

Is there any information available that explains / documents the bug(s) that require a manual deletion of tmp & cache?

You can search the forum. But whenever there is an error that seems to point to a corruption (e.g. 500 errors, screen saying to wait while UIs are installed never goes away, add-ons refuse to be installed or uninstalled) that corruption would be in the cache and tmp. This is why that is one of the first recommendations for people to try. Their system is already broken, clearing the cache will not make it any worse.

There is even a command line option you can provide to cause karaf to do this on its own every time it starts for you, so it isn’t really that big of a deal. It will lead to longer startup times but shouldn’t cause any further problems. I don’t recommend doing that unless you find that you need to clear the cache every time you restart OH.

Is cache the same that is stored in the xml/java database?

Absolutely and positively not. Only Things and Items and such created using PaperUI go in the JSONDB.

I had some issues that i had 2 entries for mqtt binding etc… when I checked in the karaf console.

The proper solution there is to remove one of them using console commands. See http://docs.openhab.org/administration/index.html

Is there a way to clear out all info in that cache/Db so it reloads it from the .cfg .items .rules .things file?

It depends on how you have your system set up. If you have used PaperUI for ANYTHING then you need to tread carefully.

thanks for this input, it helped me getting my avmfritz binding working again!

Question:
After deleting those folder contents, I did notice the following things

It was not really a big deal but if I had known that something would be missing,
I would have created a short list with the bindings I had installed

The steps I outline above are part of the standard steps that happen during all upgrades.

Hi @rlkoshak, thanks for the tuts, a non cache/tmp question, what is core file? This file located in /userdata root with about 274,552KB size(2.3snapshot #1225), can I also need to delete this core file when upgrading? 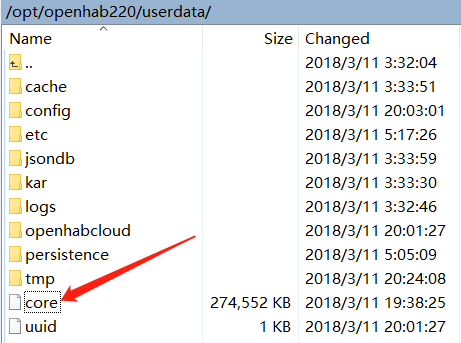 add1: I’ve deleted this core file and it seems nothing happen, system still running well, so I am confused, what exactly does this core file do and why so large? Thanks

add2: may I also ask you where to find the “changelog” when a snapshot image get pushed? I don’t see any changelog thing on https://openhab.ci.cloudbees.com/ or the docker github page. I can see the #1225 number is growing but how to see what exactly change comparing to prviously number? Thanks

A core file occurs when a program crashes hard work a segfault. I’m surprised to see one here. It is late because it contains everything in ram at the time of the segfault. Had OH ever just inexplicably stopped?

Had OH ever just inexplicably stopped?

Nope, this is a brand new docker pull today, I never happen to see this core file ever, I docker pull the same image on rpi3,2,1 and x86 vm machine, never get that core file thing, and I think OH never accidently stop.
although there is one thing maybe related to this core file, is because I use a brand new sbc called NanoPi Duo to setup this openhab server(screenshot from that server), everything running so good but memory usage is go very high(435 of 512ram + 64 of 621zram, also running 10 containers in background, grafana,influx,mqtt,etc…), not sure if this is causing the core file thing created due to low mem…
so far so good still…

Oh, wow, thank you.
After ugrading to 2.3 on Ubuntu 16.04 LTS , the openhab mqqt binding stopped functioning.
This was critical for my mysensors network.
Clearing the cache refreshed the vital components that fixed the issues
Openhab2 began to react to mqqt inputs and publishing the openhab2 event bus to mqqt broker.

@rlkoshak, reading another (misguided) post, I did not heed your advice here and deleted the folders /var/lib/openhab2/cache and /var/lib/openhab2/tmp, not just their contents. Now my bundles aren’t starting among other issues. Is there any way to fix this without starting over??

just recreate the folders and give them the correct ownership:

Thanks. Actually, it did that automatically with 2.3. However the missing link was that I needed to reinstall the serial transport in the console. Hope this helps someone.

I followed this thread and deleted files in cache and tmp because things were just going bonkers. Now Paper UI is gone, all I have are homebuilder, logviewer, and help. I didn’t have a backup, but I do have the items files, which is where I spent most of my time. What is my best course of action now?

Edit addons.cfg to install PaperUI and your other needed bindings.

Could you elaborate a little more? Stating “edit” means nothing.