I have finished (at least for now…) some custom widgets I am using to control my Onkyo TX-NR626. They should be useful for anyone using the Onkyo binding. The player control is based heavily on work done by @Murpher and @loovanloon in the thread here. Many thanks go to both of them.

Here is a screenshot of what I have: 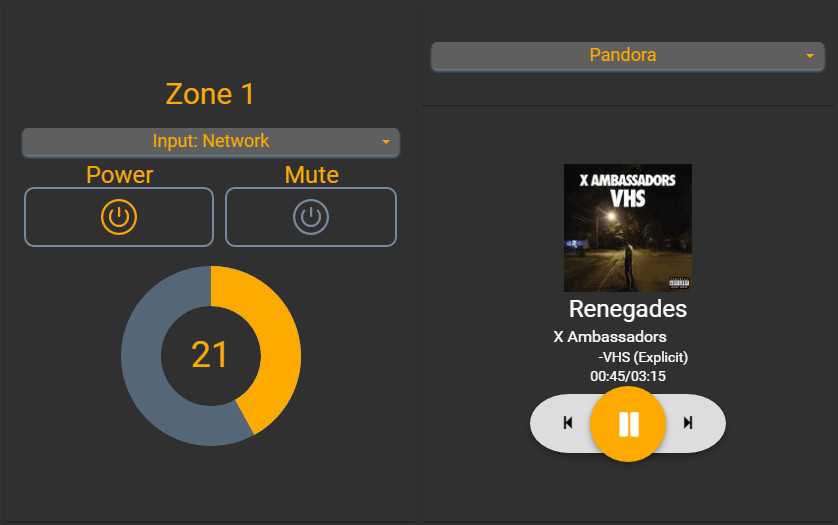 This shows most of my stereo control page. ( I actually have a second copy of the zone controls to the right (not pictured), for zone 2 on the receiver.) Here is the json for the 3 widgets:

The Net/USB controller is just the dropdown menu. It lets you control things like selecting pandora channels, or whatever else.

The Zone Control widget is shown on the left, and lets you select the input to the receiver, control the volume, and has switches for power and mute.

The Now Playing widget is the one that controls the player. It shows the song title, artist, album, etc. NOTE: The album art will only work if you are using a snapshot build. The 1.0 release does not have album art support. Also, I am using the album art, not the album art URL, as I haven’t gotten that to work correctly yet. The artwork stuff is fairly new, so it may not be completely bug free yet, but it does work for me… ymmv.

Hope they are useful to someone.

I’m going to have a play about with this. I didn’t realise the binding could interact with the Net/USB controller so I’ll see if I can get Spotify working

The playback control works great, but I can’t see a channel for album art (I’m using the OH2 binding).

The Net Menu list is returning null, but my receiver is a very old NR609 so it may not be supported.

Sadly, it’s become apparent that the dreaded HDMI Board issue is back and audio keeps cutting out so the amp might be headed for the cinema system in the sky soon anyway

EDIT: I’ve now added more channels for the net menu items and it’s looking much better. Sadly the top list for Spotify doesn’t populate the playlists. It’s still usable though. Many thanks Signal

The album art channel doesn’t exist unless you are running a recent snapshot version of OH2.

I have begun playing around with Spotify, and I get very limited controls. Basically, I see menu items for “what’s new” and “starred”, but I don’t have anything starred yet, or any playlists, so I’m not sure what is available. The “what’s new” item does populate, and I can select channels, but that’s about it. Sadly, the search function just says “see TV”, which is not really useful.

I am going to try to play around with it though. It may be that I can send a text string to the controller when “see tv” is shown, that would allow a search. I am hoping that I can work out a way to have an entry field show up, and then send the entered text to the receiver, so that basic functionality would work… no idea if it’s possible, but I will post any updates here.

I’m very excited about this, @Signal11! You’ve done the work I was planning! I’m busy working this period, but hope to get some spare time soon to try it out.

On the Spotify control issue: I just worked around the Spotify issue with a frame control showing the Spotify web player URL next to the Onkyo player controls. Though this takes up quite some space on your HABpanel UI, and therefore isn’t appropriate for smaller touch screens, however it does provide you with a Spotify UI you’re already familiar with. I work with one panel (“music panel”) using Spotify frame with onkyo controls, and a “main” panel with onkyo controls only, with a option to switch directly to the “music panel”. Best of both worlds IMHO. Since I don’t think the Onkyo nor the binding will ever provide us with full control of Spotify.