Ah, yes, I see it now in the spec. Should be pretty easy to create a A1081 thing that sends the proper URL for doors 1-3.

I also see there are Ext1 and Ext2 external inputs. I’m not sure if/how those are exposed through the API. Do you use those inputs?

I couldn’t resist temptation any longer and ordered a D101 yesterday. Hopefully it will arrive tomorrow so I can tinker with it over the weekend. 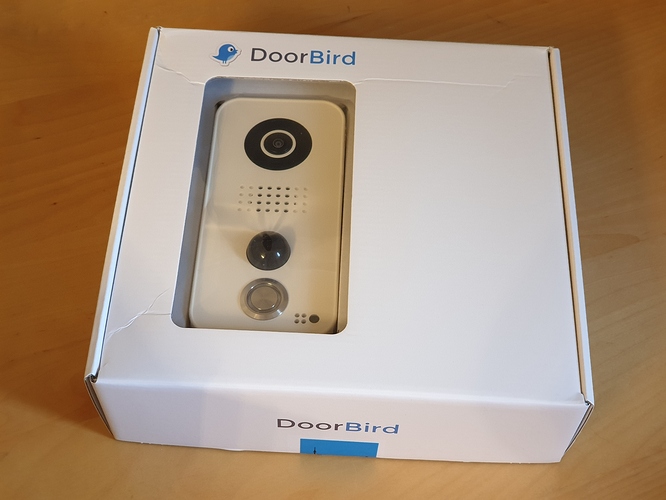 Woohoo! Now to start setting it up. I’ve got a PoE switch in the cellar I can use to power it.

Are there any gotchas I should be aware of when setting it up? Or do I just give it a static IP, update the firmware (if necessary) and add it via the Paper UI?

I’ve got a PoE switch in the cellar I can use to power it.

Yep, that’s how I have mine set up.

Are there any gotchas I should be aware of when setting it up? Or do I just give it a static IP, update the firmware (if necessary) and add it via the Paper UI?

They push the firmware updates. I’m not terribly happy about that process, but there always are compromises…

If your Doorbird is on a different subnet or VLAN than your openHAB server, you’ll need to set up routes for the UDP packets that the Doorbird uses for doorbell press and motion events.

I have a separate userid/password that used just by the binding. Make sure the user id you use has the proper permissions, including the API permission.

The motion sensor is a wee bit too sensitive for my taste. Even when narrowing down the detection area, I still get shadows and car lights that trigger it.

After a false start in which I thought the DoorBird was DoA but actually turned out to be because I’d plugged it into the non-PoE switch instead of the PoE switch I’ve got it up and running on the bench. However, the doorbell and motion channels are greyed out and don’t provide the option to attach an item to them: 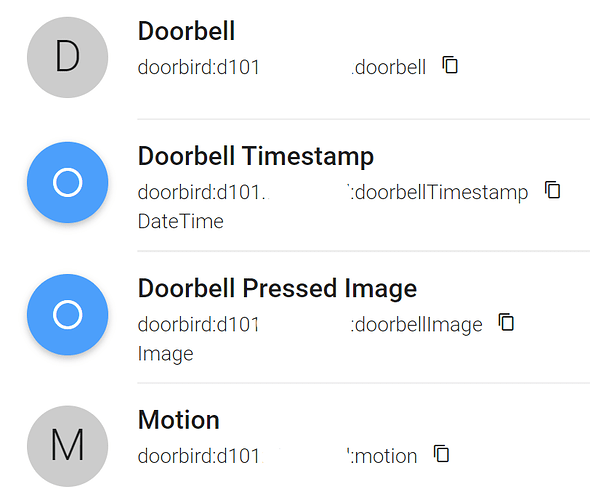 Is this expected? I’ve enabled debug logging to a separate file and can see entries added to the log when I press the doorbell.

I created a second user as you suggested and enabled all permissions for it. I was a bit surprised that you can’t select the username and password, you just have to accept the username and the password it autogenerates for you every time you tap the “change password” button. Not a big deal though.

Hmm. I’ve not seen that before. In the version you’re running, the doorbell and motion channels are defined as triggers, with profiles that provide the Switch ON/OFF functionality. It’s possible that defining items based on profiles doesn’t work in PaperUI. Can you confirm that you’re using PaperUI to link the channels to items?

Just to ensure you ment what I understood, you exlusivly use PaperUI to add items to the thing? No item files?

Yes, I have only used the Paper UI.

Like this (note the profile section in the channel definition).

Excellent! I just created the doorbell pressed switch item and it’s worked! Thanks!

The switch status seems to permanently be on now, is it supposed to revert to OFF after a period of time? I could fix that with the expire binding and a proxy item.

So I’m thinking about getting rid of the trigger definition on the doorbell and motion channels, for exactly this reason.

Are there pros/cons to either of the approaches? I had assumed that the doorbell would be presented as a switch but only because that’s what I’m used to from other bindings.

The Doorbird doesn’t generate an off, but there’s a config parameter in the thing that let’s you define the off delay for doorbell and for motion.

I set the delay for the doorbell. Thanks!

So If you need help with that - when you get to it - drop me a note, I’ll be around

Sure am I interested, great!
Unfortunately, I had to move the doorbird to an extra network to analyse it’s behavior. So I will need another week or so until this step is finished before I can start with testing.

Also note that there were a few changes made to the binding during the review process. Those changes are summarized at the beginning of this thread.

I installed the addon and it seems to work finde so far with my D2101.
I would like to know if it is planned to also support the indoor video station (A1101). I am especially interested in controlling the LED and performing calls in order to use the station as a speaker for notifications.

Thanks for the great work so far!

I installed the addon and it seems to work finde so far with my D2101.

That’s great. Let me know if you run into any issues.

I would like to know if it is planned to also support the indoor video station (A1101). I am especially interested in controlling the LED and performing calls in order to use the station as a speaker for notifications.

I don’t see any reference to this device in the API spec, so I’m not sure what functionality is (or will be) exposed through the API.

In general, for peripherals that are paired with the D101/D201x, they seem to be a bit slow in adding features to the API (at least that’s been my experience so far with the A1081 Controller).