I provided another enhancement for blockly: From now on, you can zoom the Blockly Workspace: 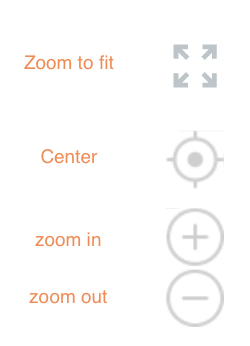 You can find this in the bottom right corner. This also allows pinching on touch screens or touch pads.

Not to conflict with the “old” Code-Button, this was “moved” into a new version into the footer of the workspace (Kudos to @ysc):

I have a generic Blockly script that runs when a light group is triggered by a motion sensor. It then waits a certain amount of time to turn off the light or in the case of a retrigger of the motion sensor keep the lights on. I’ve tried to do this with the timers available in the OpenHAB section but that doesn’t work properly as timers (or probably the event context) is lost when a different light group is triggered.

I’m now using the common blocks from this community marketplace post: Collection of common blocks. Basically the timer block that keeps the triggering event context. That block actually works great and allows me to create the desired automation.

Is it possible to include the common blocks (or at least the specific timer one that keeps the event context) into the main OpenHAB section? It’s to avoid that I’m dependent on an ‘external’ block instead of what is available in OpenHAB out of the box. Thanks for considering!

As @rlkoshak is our genie on timers I loop him in here:

Rich, the first block is the one that Marco mentions, the second is ours 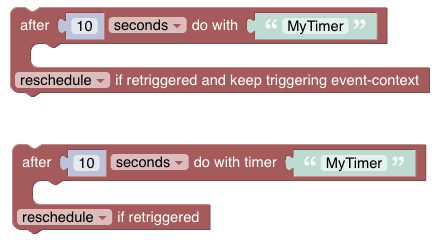 The code difference is minimal

The only difference is that it uses

Could we not just do that in general?
If not, we could give the timer-blocks an additional choice to choose from but I need to check of that would be backward compatible, so it doesn’t break old blocks.

There are subtitles involved here that probably needs to be explored before deciding how to proceed. The big concern is that

The difference is subtle but important. Ideally both use cases should be supported. I personally prefer using function generators because it lets you “fix” multiple variables rather than just the one variable. For example:

We call a function passing the arguments and get back a function that will get called by the timer. The passed in arguments become fixed and won’t be overridden when the rule runs again. But that’s a pretty big lift for the typical blockly user (though I think it should be possible).

I think maybe splitting the difference would be be better. Rather than forcing the argument passed to the timer to be the event, why not let us pass our own argument, including event? But I think that would involve creating a new “timer with argument” block where one can select the event or any other variable defined.

The first Blockly video tutorial has been published on the 21st of June on the openHAB Video Channel.