There’s differences in firmware, too

we have the same, roller shutter 2

shame on me - you´re right.

I have the same device but different revision.

the most relevant for venetian blinds are not
blinds_shutter
and
blinds_lamella

I need to use blinds_control instead of blinds_shutter to position the shutter.
Yeah you need to play with the available options…

what is the channel switch_binary meant for?

Just a guess: in gate mode, if you want to open the gate but not close it automatically.

Maybe it’s used for the Fibaro command classes, no idea. At some stage during initialization the device did report this channel, so it may be useful for something.

Hi community
I control my venetian blind with the development version of z-wave with Fibaro FGR222.
I would close the venetian blind and tilt 60%. i don’t now what is the best code for this requirement in the rule.
This is my actually code … i am not happy with this, but i have no idea to improve this.

have anyone a better solution to control the venetian blind with tilt 60%?

Omit the sleep(), you don’t need it. You can also set tilt first but that should not make a difference.
FWIW, I’m using the blinds_control channel, not blinds_shutter (and blinds_lamella for tilt).

Using shutter & lamella here - no need for sleep()
I am using the same sequence close and then tilt.

I was using blinds_control (tried with both UP/DOWN and 0/100) before, but received interesting values reported by FGR-222, which varied over time: https://community.openhab.org/t/z-wave-binding-fibaro-fgr-222-spontaneous-change-of-blindscontrol-state/33860/9 and Shading automation
Which made decision criteria for rules rather hard to predict.
After switching to ShutterPosition no issues whatsoever.

Note that blinds_shutter and blinds_lamella are of Dimmer type while blinds_control is of Rollershutter type.

Thanks for the answer. but the following sequence does not work at my system. the shutter goes down and the lamella remain completely closed.

but I found something. Can it be that the value 100 for position (shutter and control) is out of permitted range? if I try with 99 it works. the following sequence works fine.

does your system works with value 100?

Ok, thanks, that was the readon of my problem

why do you programm the sequence with .members.forEach ? that’s interesting.

what is better compared to controlling the group via command “sendCommand” directly ?

is there a reason for this type of programming?

I found it easier to read and edit to use .members.filter[…] and .members.forEach[…]

I am using the rule (example) below to determine if certain actions are required to be executed by FGR222s.

I am using the rule (example) below to determine if certain actions are required to be executed by FGR222s.

Not a developer myself, but I reckon it might be useful.

In case is this of any use, adding support for status feedback on venetian blinds tilt and position (blinds_shutter, blinds_lamella) would be greatly appreciated.

As far as I’m aware, that is what was implemented a long time ago. I just double checked the code, and the reports are being handled, so either there is a bug, or the device is not sending the reports.

I don’t have these devices, so can’t test - without something to work with, it’s difficult to comment. If you provide a debug log I can take a look.

logfile when blinds are raised via openhab: openhab lower-raise.xml (38.6 KB) 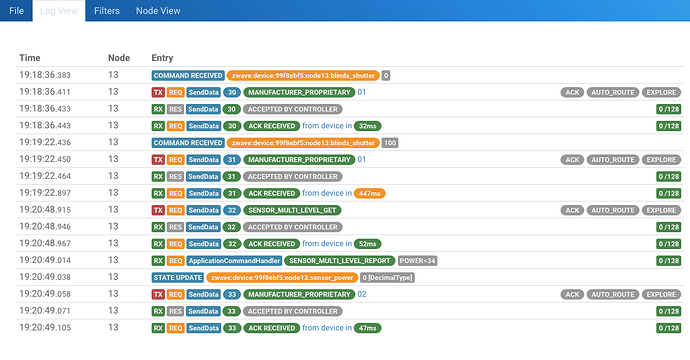 Additionally the HABadmin view of node 13: 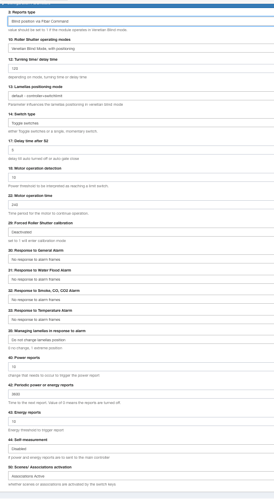 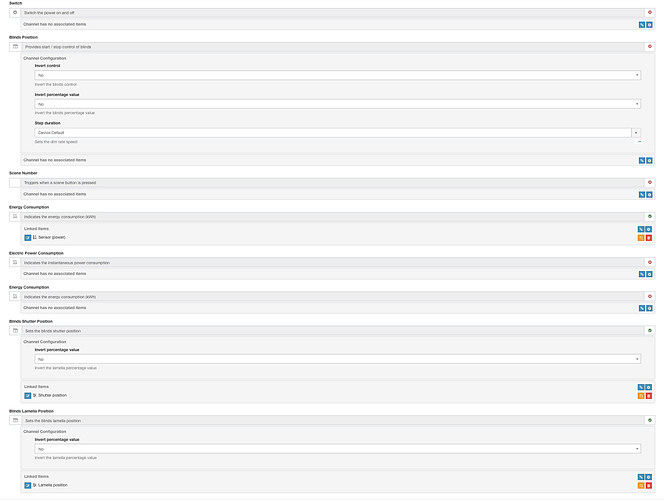 Open for any advise to change parameters.

Unfortunately I’m not familiar with these devices. Reports are normally configured through associations - I don’t know if there’s another association group specifically for these reports, or if they are sent through the standard features like the lifeline. Unless the device sends something though, the binding can’t update itself.

Sorry - I know that’s not so useful, but I’m not sure what else the binding can do to resolve this - I would just suggest to update all associations to point them all at the controller and see if one of them starts the reporting.

with changing the associations groups to:

I am receiving updates from FGR-222 when using the HW switches:

Additionally I changed “Self-Measurement” to active, to see which impact that setting has - unfortunately none

I guess the updates on shutter position and lamella tilt are hidden in the „MANUFACTURER_PROPRIETARY“ messages.