How to create groups that can control multiple items

I guess I have another typical beginner question:

I have items - e.g. lights (Hue) or roller shutters (Fibaro RS3) - in my system that all work nicely. For all of them, I have points and channels created to control them and get their status (samples below). This all works fine as well.

To be able to control items that belong together - e.g. all lights in one room, or all blinds on one side - with one action or widget, I have created groups and channels between these groups and the things again. This also generally works well, with some exceptions here and there:

Before now continuing that path, I wanted to check with the experts here whether my approach is correct. Or is this all rubbish, and there is a much better way of achieving my goal? 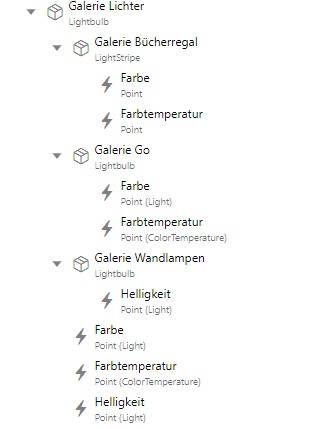 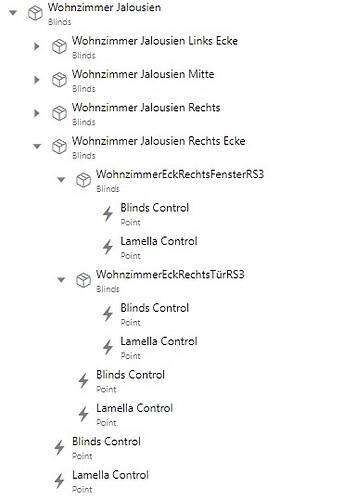 Normally your approach is correct but sometimes limitations of the technologies involved make it not work.

Short version - don’t do that.
openHAB Groups have the magical property of distributing all commands sent to them to all members, which then do whatever they do over their own links (if any).
No link to any binding is required on a Group, and I am surprised the UI let you do it at all.

I am aware of that group functionality. But what am I supposed to do with things that receive identical commands for different channels?

Now if I would send 100 to the group, that command would be automatically sent to both channels, right?

I had actually tried this approach in the very beginning of my project, but gave up on it exactly for this problem.

Now if I would send 100 to the group, that command would be automatically sent to both channels, right?

Maybe I’m missing something: why not create two groups for this example? One for the blinds, and one for the lamellas?

wouldn’t every group still send commands to both channels?

What do you mean both Channels? Are your Items connected to multiple Channels?

wouldn’t every group still send commands to both channels?

Ye-es, but you have control of what “every” group includes.
Items may belong to more than one group.

that sort of thing might be useful for display arranging, but as you say no good for commands being distributed to everybody.

That’s okay, groups are free and we can make more.

sorry for the late reply. Do I get that right: you mean I should not put devices into groups the way I did it, but rather put device (thing) channels, items, that belong together into groups. Understand. I’ll give that a try and report back if that solves my issues.

so I tried this out. Results are pretty similar to what I had before. controlling my blinds from the WEB UI works as before, my problems with the iOS app are also still the same - basically, controlling the blinds works with sometimes unpredictable results. For example, fully tilting the lamella up or down works most time, but setting something in between (I use a slider for that) doesn’t.

I also realized I was a bit inaccurate in the earlier description of my setup. I don’t have links to bindings on a group - that is in fact not possible in the UI. What I do have is items in groups that link to multiple channels. see the two screenshots attached - there is one RS3 that two channels, one for blinds and one for lamella. each channel is connected to two items, where one item belongs to a group that represents the specific RS3, the other item belongs to a group for all RS-devices in that room. As said earlier, this pretty much works, with some occassional exceptions here and there (similar to what I have with the new setup).

So I guess my question again is: is this the recommended way of doing things, or is there another best practice?

There isn’t a one-best-way to do this.
See Rich’s “point 2” earlier.

For example, fully tilting the lamella up or down works most time, but setting something in between (I use a slider for that) doesn’t.

Maybe understand that to determine your path forward.
Your events.log will tell you if openHAB is doing its part as you expect.

ok. I was playing around with all this a bit more. It seems some devices simply have some sort of “latency” problem (as already suggested by Rich), and I suspect this is caused by their channels being connected to multiple items. The events.log (for sure I consult that to understand what is going on

) is showing all commands sent and received the way I would expect it, just the things do different things sometimes

. My really big issue with that is that the UX sometimes doesn’t show the thing status correct, e.g. a blind might really be closed, by the UX shows it as open.

For that, and in an attempt to reduce complexity of my setup, I was trying to get rid of these multiple items per channel and make use of the “group propagation” functionality described above, essentially following the great guidance received in this thread.

In order to achive that, I am removing the additional items per channel, and assigning the one item to multiple groups.

Now it seems I have a defect in the OH3 UI: while I can assign one item to multiple groups, the semantic model view does not display that correctly (see screenshots). In that example, I have an item " GalerieRS3_BlindsControl" as member of two groups “GalerieRS3” and “GalerieJalousienBlinds”. However, the semantic model view only shows the item as member of one of these two groups - always the last one the item was added to.

Any suggestions? Am I doing something wrong again, or is this really a defect?

Am I doing something wrong again

Given that the default persistence needs to be embedded and rrdj4 and mapdb are the only two embedded databases the only solution is to not provide any default at all and require all users to pick and install one. In the mean time all the analysis functions will not work in Pages and people will complain about OH shipping with “half backed” UI functionality.

is that feedback meant with regards to my problem with the semantic model view? If so, sorry, I don’t get the point?

OH3 UI: while I can assign one item to multiple groups, the semantic model view does not display that correctly

No, it’s not you doing something wrong.

all right, so this is simply a defect in the UI, and I can go on changing my configuraiton like that, right?

No, it’s not you doing something wrong.

Actually it kind of is.

all right, so this is simply a defect in the UI, and I can go on changing my configuraiton like that, right?

No, it’s how the model works.

The model has the following rules.

Typically, to meet the above rules, one will not put their functional Groups (e.g. AllLights) into the model. Or, if you do put it into the model, you’ll tag AllLights with a Point/Property pair of tags and put it somewhere high up in the model’s hierarchy.

The model is intended to represent the physical layout and hierarchy of your home automation system. You wouldn’t have a Point that is part of two completely different Equipment. You wouldn’t have a Point or an Equipment in two physically different locations at once (there is an edge case I’m ignoring for the moment where one has a switch in one room that controls a light in another room). That’s physically impossible. So the UI doesn’t support it. I think HABot also has problems when you do that too.

But, as I said, you can still have your functional groups. Just don’t put them into the model.

now you managed to completely confuse me. I thought I was following the recommendation of rossko57 above, and simply put my items into different groups - one for visualization, one for automatization. The fact that the UX accepts all this and let’s me do all these things, and the fact that this pretty much works aside the small hickups mentioned, only adds to my confusion now.

An Item can be a member of any number of Groups. However, the model only allows an Item to be a direct member of one semantically tagged Group.

Groups that provide or represent some function, like AllLights that lets you turn on/off all the lights in the house with one command, are perfectly fine and encouraged. Just don’t give them a Location or Equipment semantic tag.

The model isn’t everything. It’s one way, an optional way, or organize and represent your Items. It is not the only way. Not all Items need to be a part of the model. Rossko suggested you create the Groups. He didn’t mention anything about the model.

wow - I was entirely misguided on that. Thanks for the clear explanation. Not sure if this is a “handbook-not-read” error on my side …

I will rework my setup accordingly now, and will keep posting progress here