Imitating the Power Consumption of Lights (and others)

In this short article, I’m going to show how to monitor most of your energy consumption without investing in special hardware. This solution is based on the fact, that most devices (prominently all your lights) have unchanging wattage only depending on their current state, which is already controlled by your openHAB system.

By the help of power consumption measuring modules, such as the Homematic HM-ES-PMSw1-Pl, Sonoff Pow or similar, we are able to monitor the consumption of dynamic consumers, be it our washing machine, fridge, TV and more. These modules are great to measure the energy these devices consume over time. The measurements can be used to graph consumption, calculate energy cost or even build higher level state machines from.

However, the mentioned devices are not the only power consumers in our home. You could continue adding these pricey consumption measurement modules to more devices but for many of these, that might not be practicable and is actually not needed. Your home is already controlled by openHAB and the chances are high, that you can derive consumption from that. Devices like light bulbs or LED stripes have a constant wattage when active. We can easily represent this information in openHAB.

There are a few ways to determine the wattage of a light/device. The first one is more than obvious: Just check the label or housing: 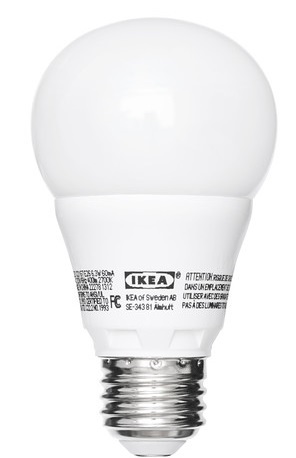 The second way to measure the constant power usage of a device is by using an energy meter. These devices can be bought for cheap (~20€) in most utility stores:

It’s a matter of minutes to determine and write down the wattage of most devices in your house.

Let’s continue with an example. I have an LED stripe in my home and after connecting the energy meter in between plug and socket I found out that it is using approximately 17 Watts when turned on (and 0 Watts when turned off). We can now build a simple rule to reflect the consumption of this device in a new Number item:

I’ve decided to condense this rule to make my rules file with dozens of these easier to read:

Adding all further devices in this way is as simple as copy&paste. The shown code lines are working in openHAB 2.0 but should just as well work in openHAB 1.8.

On the Influence of Dimmers

Some devices have a constant usage which is related to a dimmer level or some other openHAB Number item. By taking multiple measurements it’s possible to derive the power usage of your device in relation to this item. An example could be (Dimmer percentage on the left, measured power on the right): 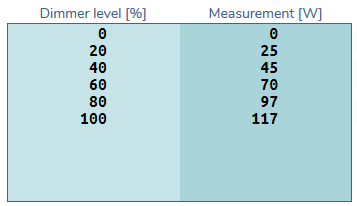 Afterwards you need to find the mathematical correlation between these two. You can use a curve fitting tool to do so: https://www.mycurvefit.com
Depending on your device try y=a*x, then y=m*x+c and then continue with more complex functions like y=a*x²+b*x+c till you find a good fit. The simplest form will be more than enough! It’s no rocket science. 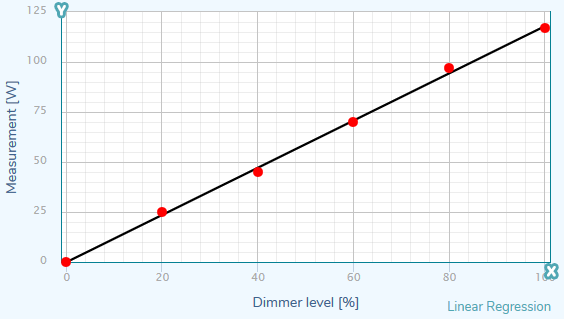 The result for our example from above is pretty obvious:

Transferred to an openHAB rule:

We have successfully added a Number item per device to represent the usage of these at all times. You can now do the next step. An example would be graphing all devices usage with InfluxDB+Grafana. You can also have the overall usage as a Text sitemap item. Lastly you could add logic to accumulate consumption over time and potentially decrease your energy bill

Is this still work in progress or is this tutorial finished???

I´m missing the way, how to get the time how long the lights are on. If i only get the value “17” without the duration i can´t do very much with this…

Hello,
yes it is finished but we could of course add further details.

The topic of this short tutorial was to create an item that always holds the usage of one device. By the help of the posted rule the item will be set to 0 watt when the myLEDstrip is turned off and 17 watt when it is turned on. I’ve just broken down the rule to multiple lines to make this better visible.

You could now for example persist these usages with InfluxDB+Grafana, that’s what I am doing. You can also see the overall usage as a Text sitemap item. I’ll add a summarizing sentence at the end.

I´m missing the way, how to get the time how long the lights are on.

That was not my intention. I guess what you are talking about is, that you want to know how much energy was consumed over time and how much this will cost you. Correct?

While editing the article I realized my fault. I’m talking about the consumption of a consumer the whole time but the tutorial is only covering the part, where the wattage of one light bulb or device is made known to openHAB

yes, I thought I can see my daily cost for lighting.

Would be great if you could make a tutorial for this too (or expand this tutorial).

There are different ways we could do that.

Best thing would be a page where i can see all my lights and there i get power consumption for every device on its own.

Then i can add all devices and get the sum of all lights.

This way i can see, where it would be a good idea to change old bulbs to new led lightings for example. Some rooms which i enter not very often, there it doesn´t make sense to change to leds - too expensive.

Storing consumption for a longer time would be great.

I do monthly checks. I have some devices with does not support energy metering, and some (like z-wave), which have their internal kwh-counter.

Every month I send a report with usage as well as resetting all counters.

I have a group kwh sum for all items with kwh.

I then do a sitemap

Here you will be able to see all members in group

And a rule to reset:

You have a zwave device which gave you the kwh for each light.

But i only can count the kwh by “watt x time”.

Now i can see when a light is on, there i get, how many watt the light consumes at this moment.

But i want to get kwh. I have persisted the watt to rrd4j already (every change, every minute).

How can i get kwh with this information?

Trying to strip off a lot of specific stuff … Also I’m not using rrd4j, only mapdb I only store the latest value.
This can probably be done in some other way with avargeSince-function if you store values in a db. I’m using a timer…

Sitemap: (So I can change the usage in watts using the basicui)

Great script. That’s probably how I would have done it.
Love the usage of a rescheduled timer and the defined function.

I fear that this script is too much for a beginner though. Would you be able to write a tutorial like description about it?

Great! Thanks a lot! I will try to edit it to my needs.

Is there a way to do this with groups or do i have to write a rule for each light?

@ThomDietrich
I agree, I can write something in the coming days.

@halloween
It’s not impossible, but it’s more difficult for sure. I have something similar for handling my sonos-groups, but I use hashmaps where the label of item is the key. It’s also possible to sort a group so you can get the most recent changed item, however, I won’t display a solution of that here as it is quite messy.

I won’t display a solution of that here as it is quite messy.

If you have Items that may not have been stored in persistence:

Didn’t express myself very clear, was referring to the generic solution as a whole, it is possible that it can be done in a better way than what I was thinking, but my solution is messy.
I’ll try to write a small guide but any improvements and or generic suggestions would be good to see.

@rlkoshak it would actually be a very nice gesture of yours, if you could write a hands-on tutorial about how to best go from items-based rules to group-based ones. I believe many users would benefit from your experiences for best practices in that area. I’m not talking about a “Design Pattern” but a step by step guide

I think it still qualifies as a Design Pattern, but I’ll write it more like a tutorial than just an example.

I’ve already written most of it up in my own notes. I’ve transcribed it and beefed it up a bit here:

Problem Statement Often one finds a number of rules that are very similar and that all work on similar Items. One way to solve this problem is through the use of lambdas but an even more flexible approach is to use Groups. This Design Pattern presents a step-by-step tutorial for how to use Groups to consolidate and simplify the these several similar rules into one single rule. The example used will be based on Contact Items that represent door and window sensors. Whenever any of these Contac…

It ended up being difficult to provide a step by step guide as the steps are just:

However, I did provide examples for and description of what all of the MyGroup.members.* methods do (at least all the ones I know) including map/reduce.

I’ve only looked at it briefly but Yes, that looks great!! Thank you

I should not forget to add your design patterns tag to this or something similar: https://github.com/openhab/openhab-docs/issues/205
I’m waiting for the forum restructure. That will be fun.

Now I have no excuse anymore, to not build a group-based rule for the above