Hi, I was installing the new openhab 3 I i several places I read some references to another user beyond administrator. But I can’t find any place for creating new users. So is Openhab 3 multiuser?
Thanks

According to the documentation additional users cannot be created yet by using the UI. The karaf console has to be used instead. See e.g. Changing the UI password in OH 3.0? - #6 by Frenchman

Are they use for something? or the system is still not prepared for them? Will I gain something?

From what I saw in the API the only authorization role I saw was Admin. That does not mean others will not be defined in the future

You can setup a User as “user”

A user with role “user” will not see the settings and won’t have access to administration, so it’s already useful, even if not possible to create multiple users via UI.

not possible to crate multiple users via UI.

Except for extreme troubleshooting normal users should not need to access the console. That was my point. Karaf is not easy for many users who are not developers nor system admins… Or perhaps I am mistaken and OH is only targeting that group of users.

My point is, the feature is not in the UI yet, but for sure it will be. But you can already use it, and the commands are easy enough.

Are they use for something? or the system is still not prepared for them? Will I gain something?

Yes they are used for something. It is possible to hide and show controls in the UI based on who is logged in. For example I can opt to not let normal users have the ability to move my PTZ cameras so they point at a blank wall, but admins can fully move the cameras around.

The command openhab:users cannot be found in my instance (Docker Version 3.0.0 Release). I read that this command was not available in some older SNAPSHOT versions but it should be there in the release version doesn’t it?

Did you try on normal console or did you try the following :

Where is openhab-cli located? I cannot find it in the docker container.

In my package install, openhab-cli is located under /usr/bin

If you have docker container named openhab and default passwords please run:

and then command users

It is not there in the docker image. What would be the difference to the other options I tried? The ssh is the one that is officially documented here: The Console | openHAB

Thank you smarthomepch but I tried that before: 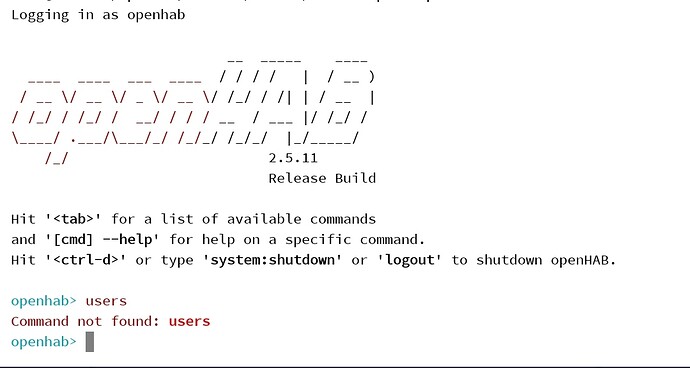 It is not there

Ooooooh I seeeeee… I accidentally connected to my old 2.5 instance

Sorry guys, my bad! And thank you for your help!

Yes I still have my old instance running while I migrate to 3.0.0. Sorry I should have noticed that before…

good that we’ve found what was the reason

I did not realize that “client” simply opens a ssh connection. So even though I started it in the OH3 container it connected to my OH2.5 container…