Hello to all,
I’m using the community for the first time and the openhab2 too.
I had a problem, and don’t find a solution at searching.

I want to control my 433MHz powerplugs with openhab2.
I had installed openhab2 at my raspberry pi3. And can controll my powerplug from the commandline.

I installed the exec binding 2.0 as addon.
When i create a new command as thing and create a switch as item, then i can run the command.

But at the sitemap, my switch will fire the command at slide switch to on. That is right.
But when i slide to off, nothing will do.

But this solution doesn’t work at execbinding 2.0

How can i translate such a function to version 2.0?

Can any one help me?

I don’t use this binding myself but I think what I would do is:

Again, I don’t use this binding so have no idea if the above would work.

The problem is solved.
At a other topic, the problem discussed.

Alex, the script of your link works fine

And in this topic the solution was created:

How can i close the topic?

I had installed openhab2 at my raspberry pi3. And can controll my powerplug from the commandline.

I’m curious, what package you used for your 433MHz devices. I tried a few weeks ago and couldn’t get it running. I tried pilight, but couldn’t record the commands from the remote… Do you have a link to a HowTo you used? Thanks!

How can i close the topic?

You can’t close it, but there should be an icon where you can mark it as SOLVED.

Thomas, do you understand a german tutorial?

I will write in english, okay it’s not the best, but i think this thread should be english

You can use this german tutorial.
https://tutorials-raspberrypi.de/raspberry-pi-funksteckdosen-433-mhz-steuern/

Which plugs do you use?

Thanks for the tutorial. My plugs are “Etekcity” and they don’t have DIP-Switches. I found a tutorial which should sniff the traffic on 433MHz and use it to turn them on and off - but I couldn’t connect to them… (sorry, german also) 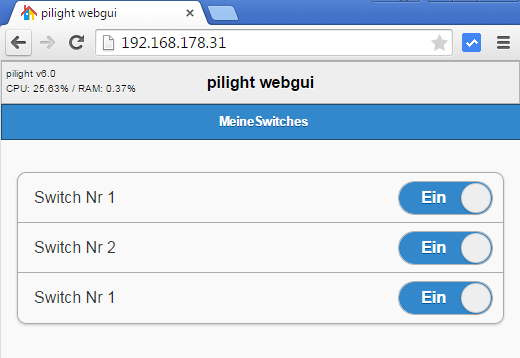 
I’ll try your tutorial, if I get home. Perhaps I’m lucky!

Can you change something at your plugs or nothing?
I dont have a dip, but i can change a group and a itemnumber…

But when you can nothing change, then maybe they communicate and change their address…
i hearted about this… then you have a problem, because they change their on/off-command sometimes…

Hi Thomas,
if you use the arduino-hardware with your PI, than take a look at this community-entry. MartinVW is writing a binding for arduino. Maybe this could help you!

Interest in a homeduino binding Bindings

Hello, At this moment I have both pimatic and openHAB running. However I like openHAB and want to switch completely. With Pimatic I'm using RF 433,92 Mhz devices (Klik-aan-klik-uit) with an Arduino running homeduino (https://github.com/pimatic/homeduino), this is a cheap alternative for the RFXCOM. See an example hardware setup on: https://github.com/pimatic/pimatic-homeduino I like the solution and it works well. Since I'm a professional Java developer I'm planning on building a homeduin…

Can you change something at your plugs or nothing?

AFAIR, I could change the channel or something (for not having my neighbour switching mine), but the codes come by sniffing. I’ll have a try. It’s not bad, if it doesn’t work, I bought the plugs for christmas lighting, where I couldn’t reach the outlet. But I’ll see.

if you use the arduino-hardware with your PI,

Thanx for pointing me to this, presently I don’t have an arduino, but I’m keen on learning that also!

Let us know if it’s work…

sure - I will test it again the next days and keep you updated.
edit: I’m lacking the 330ohm-resistor. I’ll try next week.

I’m having the exact same issue, finding it difficult to migrate from OH1 to OH2 and get my 433mhz switches working with the exec binding.

@SnitzelWeck92 could you detail your exact setup / fix? I’m finding it difficult pinpointing the exact solution in the posts you’ve referenced.

I hope i can help you with my summary…

Ok, so now I tested different approaches, so basically I got through this one again - but without the transistors:

Whats was the key, I don’t know, but basically what I did was:

e.g. I got this sent after pressing the remote:

In that case, you can change the /etc/pilight/config.json:

so the Attributes you’re looking for are:

Hint:
pilight isn’t restricted to 433MHz power outlets, as you can see in the protocol-list, there many more devices like weatherstations, motion sensors, presence detectors, … basically every 433 MHz device should be controllable via pilight.

thank you for your answers here, especially Florian.
Now there is one question left for my part. Is there a possibility to implement the things, items, etc. directly in the jsondb? Or do I need to use the separate files? And whats the best way to edit the jsondb file? I made the experience that the jsondb content manually added is deleted after a reboot of OH2.

Great tutorial.But I never got it to work. It wouldn’t let my user “openhabian” execute the command. I tried with raspberry-remote and wiringpi. wiringpi stated an error message like “Unable to open /dev/mem or /dev/gpiomem…” I tried several solutions with adding more rights to that openhabian user but without success. And I haven’t been able to run the command in openhab as sudo.

is it possible to configure a simple on-off-switch with the exec command in the Paper UI?
I was able to connect a switch item to the “running” channel of a Thing based on the exec binding but the Switch cannot be toggled. I am not sure how I can set-up different states ( ON OFF ) in the command field within the Paper UI to get the switch to work.

Thanks and best regards,
Martin