Tried to execute command but not in whitelist (EXEC)?

That’s different. That’s not a whitelist error. That error just means the command called exited with an error code instead of exiting normally.

but I ran node "path.js" message in cmd and it gave me the decrypted text?

But you didn’t pass an encrypted message to the script, you passed it “hello” according to the log.

So could it be that it’s running the command with the commas for some reason? Although there’s no commas in whitelist or mqtt transform…The first one kinda looks like an array could it be that the space separates the elements or am I thinking too much?

same error with a python script, which just returns uppercase, but logs are showing array like command

Dumb question, but could the issue be something related to the commas?

That’s just how it broke up the command into its parts. The first is the command and the rest are the arguments.

I is not running the command with the commas.

hmm…that’s weird. My script is just

in python, and when i do python filepath.py hello it simply returns HELLO in cmd…does exec want a different command?

I’m not seeing the logs. I don’t know the system. I don’t have the specific code/config that you are running right now with that python command. You are not mentioning what state the Item is in.

Hi, I have just filed to get this properly documented. Here is how it will look in the docs: Actions | v3 Documentation Preview (deploy-preview-1369–openhab-docs-preview.netlify.app) Feedback is highly appreciated. cc to @holgerf who commented on my issue on github.

Depends on what you mean “work like”. executeCommandLine doesn’t require an entry in the white list. It can only be used in rules. You need to pass each argument to the command separately instead of as one string.

Is there any benefit to using MQTT transformation for incoming messages vs a rule that executes commabd line for item update? Would there be a difference in performance if there’s 1000 messages coming?

Frankly, attempting to processing thousands of messages a minute using Exec is likely to fail not matter what, especially if it’s doing something so CPU heavy as decryption. It’s a heavy lift to spin up a process for every message and I doubt anything but a really powerful machine will keep up.

Using a transformation at the binding will happen sooner since an event doesn’t need to be created and processed first. But ultimately, it’s going to take the same amount of processing no matter what.

It’s really hard to help without the actual code and configs you are running and the logs that are generated.

this is the python code

error is the same for js and python

Now Im trying to use execute command line in js automation (ecma2021) but this simple example:

isnt even working i get this as error:

Also thanks a lot for continuing to help me with all this : )

I don’t care about the Python code. Frankly it’s irrelevant. I need:

Now Im trying to use execute command line in js automation (ecma2021) but this simple example:

Did you change any of the JS Scripting settings under Settings in MainUI?

There are a ton of steps between an end device and an Item’s state and from there there can be a ton of steps to get through rules and display on the UI. Something can go wrong at any one of these stages.

Given that error, I’m not convinced that you’ve actually created a rule at all and have instead created a transformation or chose Rules DSL instead of ECMAScript 2021 or something. Seeing the full rule and other configs will instantly reveal the answer though.

Items are all string. Decipher is one item that has the received msg, decrypted is another empty/placeholder item that’ll hold whatever sendCommand sends it.

I used the UI to create this and selected ECMA2021 and wrote items.getItem("decrypted").sendCommand(items.getItem("decipher").state); to just see if it works, and if the value of decrypted is the same as decipher…but the error is in the previous comment

Goal: Ideally I would like to use this in rules/ecma2021 script:

lmk if u need anything else, thanks!

I assume the cases match? It’s “decipher” not “Decipher” for the Item name?

Look in MainUI → Settings → JS Scripting and verify that “Use Built-in Variables” is selected. The only think I can think of that would cause items to not exist is if “Do Not Use Built-in Variables” is selected. See JavaScript Scripting - Automation | openHAB. You can import everything manually with var {Items} = require("openhab"); (I think that’s how to get Items when Built-in variables are not injected for you.

For the executeCommandLine, you need to pay attention to two different set of docs.

You’ll see it looks a bit different than what you tried.

@rlkoshak yep, cases match. Built in variables was selected, unselected it and tried, and tried selected again, still not working. Do I have to uninstall and reinstall this add on maybe?

This is the error if I import manually:

and yes I used both docs but none worked.

I have no idea why

@rlkoshak just to confirm, in my channel configuration for transformation i have 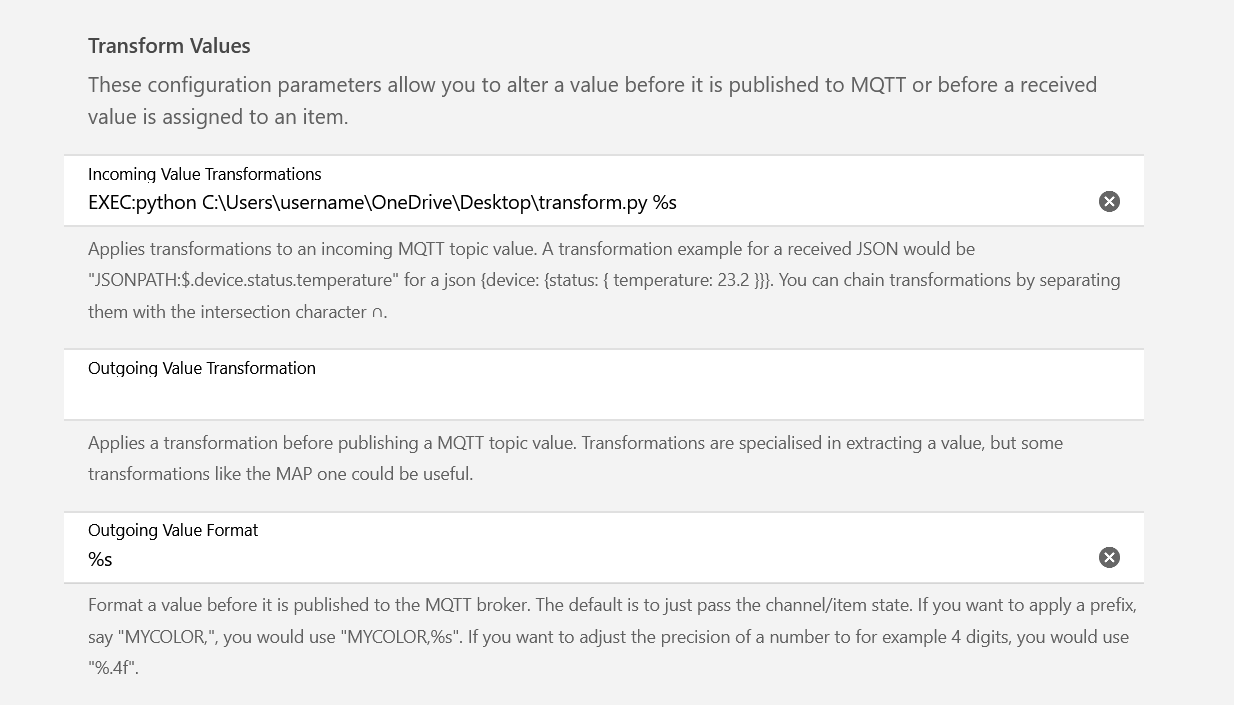 Is there a way to use execute command line here with exec? Is the command typed in the correct way to be executed correctly? Is this and the whitelist the only two places where the command needs to be?

This is the error if I import manually:

OK, you have a very unhealthy openHAB instance. You are out of memory. What version are you running? 3.2 release and early 3.3. milestones have a memory leak that appeared most when you had rules that crashed.

You need to restart OH. If possible, upgrade to OH 3.3 release or later which has a fix for the memory leak.

As long as you are getting memory errors, you can’t trust anything your OH is doing.

Is there a way to use execute command line here with exec?

No, it’s a rule action, only available in rules.

Have you tried giving it the full path to python or node? In general openHAB doesn’t get a full shell environment. What you have on the terminal may not be available to OH when it runs the command.

I’ve also seen weird stuff happen when trying to run scripts like this from OneDrive but that’s in an office environment so may not apply here.