There are 3 main camera widgets that I have created:

With this widget you can display a thumbnail of the video with a user selectable refresh rate to keep the network traffic low. This is a good thing when you fill the Habpanel screen with lots of cameras. Then when you click on the thumbnail, the video opens up into a larger screen and can be at a higher frames per second rate. Clicking again will close the popup video screen allowing another cameras thumbnail to be selected. 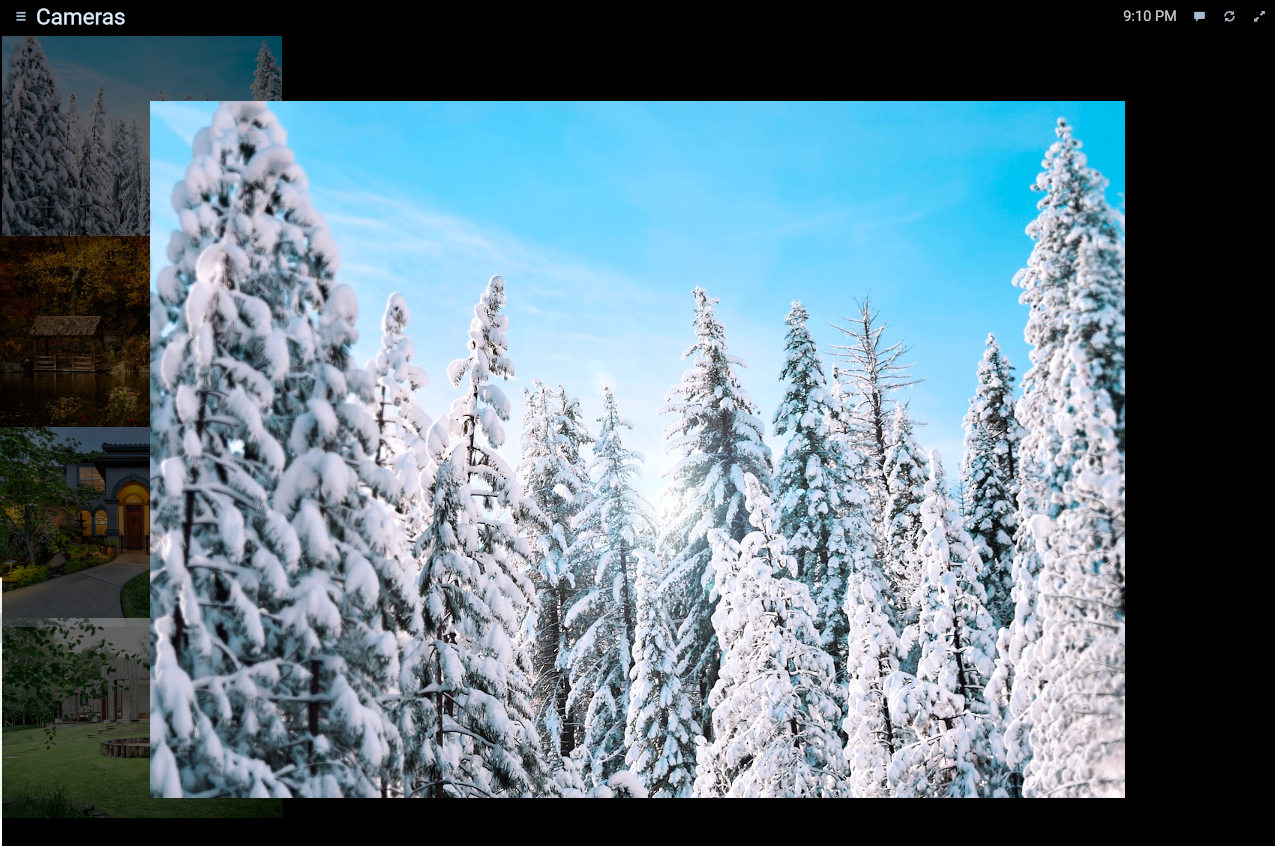 EDIT: Now you can…

If your using the ipCamera binding you can use any of these urls if the ones from your camera do not work due to authentication issues.

This widget can be installed from the habpanel editor by clicking on ‘add widget’ then ‘get more’.

Last night I updated this widget as I found that when you mixed this widget with the Clickable PTZ version you would get PTZ controls showing up wrongly as it was getting CSS code from each widget mixed up. Should be fixed if you download the widgets again and then check all the settings are still set correctly.

Wow , great widget, thank you very much I’m just testing it for a gate camera and the popup functionality is great.
Just my camera that is Ubiquity one has only 2 options for the output

Can you maybe please give me some guidance how to modify the widget to enable refresh on the full screen also. That could be a 3rd option apart from HSL and mjpeg in the config.

Use the ipCamera binding to create HLS or MJPEG for you.

Hello Matt,
The widget is exactly what I was looking for, thank you.
On PC-Browser, the widget works perfect.
On my Android phone in the Openhab-App HabPanel it does not show a thumbnail image nor a stream after clicking on it. Just the “missing image”-icon. In the “HabPanelViewer”-App it works. But that App is to slow to use it day by day and can’t be used in remote mode.
Do you have a solution how to get the stream in the Openhab-App?

Are you using embedded credentials? These look like http://user:password@ip:port/stream
If so that is the cause they were removed from many browsers as it is against best practice. Use the ip camera binding to solve.

I User the IP Camera Binding and got this (Photo) in Control in paperUI. I copied the URLs of Mjpeg and jpg into the Widget in HabPanel. It worked In pc-browser , but didn’t Work in the Android App. What is the difference?

Android app VS in a browser on android , have you tried both? I really have no idea, perhaps look at the HTML code of the widget, it may have an issue that android is more fussy on.

I use your plugin for my doorbell. When it rings, the modal opens. Just like the garden camera, which opens when a motion detector is triggered.

Maybe an idea for an extension of your plugin 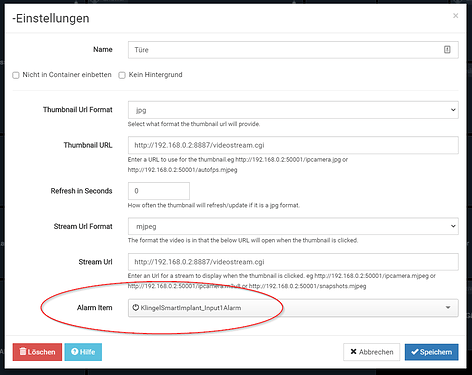 Look at my other widget I think it’s called camera history. It can be used to auto open a pop up live view when the alarm goes off.

Yes i saw it, but it don´t uses the bootstrap modal and looks not as good as the camera, clickable plugin. Also it does not work when the screen is scrolled down, the live overlay is always placed on top of site.

Your plugin “camera, clickable” is just the right minimal, good looking thing for my use case.

Glad you like it. Feel free to combine both and create a widget that suits your use case And share it back. I don’t use habpanel and it was an experiment for me to see what was possible and I am not a HTML expert so hopefully someone with more skill can extend it into something better.

@matt1 can the widget alone play a .m3u8 feed from my shinobi server?Need to have ffmpeg installed on my pi?Or it only can play .m3u8 from the ipcamera binding?

It can only if your browser supports HLS which can be usually added with a browser plugin.

i see ,i tested with fully kiosk browser (on android) and works well ,when i click the widget hls starts to play ,I tested on chrome on my windows pc but it doent play when i click the widget,just a black window appears.I installed and test 2-3 hls chrome plugins and i see that on a chrome tab the .m3u8 link plays well.What do u think i am doing wrong?
edit: also tested chrome android and hls playback in widget is working ok …

@matt1: First of all thank you very much for the widget - great idea!
However, I am struggling with the same as @xsherlock. Could you provide a third option beside HLS and mjpeg for the stream which is still a jpg snap but with the option to set a higher (or actually a different) refresh rate?

Is there any chance that you may add this to the widget? Thanks in advance

Have you tried using the ipcamera binding to create either stream? If your camera can go as low as 250ms between snapshots and do it reliably Then that is a good way as it will be lower cpu load compared to creating mjpeg if your camera does not support it. To compare My odroid n2+ can create a mjpeg stream that is 1080p and 20frames a second with a 15% cpu load but many slower arm based processors can not come close to that.

I don’t want to spend my time looking into what your suggesting, Not because it is not a good idea, but I have limited Spare time. From memory I may have tried that and found it did not work on my cameras that are limited to 1 pic per second. I also do not use habpanel myself, this was just to help others get a start on creating some widgets.

The other thing to consider is that openHAB V3 has a new UI that may make this widget a dinosaur if someone creates a widget for it.

Yes, I’ve tried the ipcamera binding but I did not get my cameras running. Actually they are not listed as reported as working also.

I thought it should be quite easy to change the widget as I proposed since the code is already existing as it is the same as for the thumbail which needs just to be copied for the clicked view (instead of mjpeg stream) - but to be perfectly honest these are just some thoughts of someone who has not really an idea of it.

Since you are not interested in working on the widget anymore, is there at least a chance that you give us some explanation / hints of the code that maybe someone else (like me) may give it a try? As far as I understand this was your intention - helping others get starting on creating widgets. Maybe you got me

I can only give you a rough idea as I have not played with HABpanel in 6 months. The normal Image widget is what this widget uses to do what your wanting. So load up a normal IMAGE widget and look at its options that it has and compare them to the ng-init line in my widget. You will need to create a new ng-init line that loads up the parameters that you want to use. Once you have done that your half way there.

Yes HABpanel and also Sitemaps are still there and means that when you upgrade, all your current work can still be used. However think of the new UI as a new improved version of HABpanel. It is a lot more powerful from what little I have played with it. I really don’t know much about it at this point so I dont know if the new UI does everything better, or if HABpanel still fills a need other than backwards compatibility.

Hi Christian,
do you mind sharing your widget? I was about to do the same before I found your post.

Thank you very much in advance.