Over the past few months, I’ve been working on a series of videos for my Youtube channel focusing on a new user tutorial for openHAB 2. For these videos, I’ve developed a number of slides and a script, with the original intention of using them to create my videos. That said, these should be useful as standalone products, as a new user toturial, to explain the basic concepts of openHAB 2 configuration. As requested by @rlkoshak in the PaperUI-NG / Beginner's Tutorial wiki post, I’m posting the slides, with their associated write-ups, in sections, as they were used in the videos.

The goal of my videos was to create a series that would be useful for the more “visual” learners (like myself), who lose focus when reading a wall of text, or just anyone who would rather see things done visually, rather than read about them in documentation. They are also meant to simplify the concepts of openHAB configuration, to prevent over-feeding the viewer with too much information to start with. The idea is to present the topics in a basic format (perhaps even over-simplified), and allow them to explore the topic more on their own. This should serve as a good baseline for the PaperUI-NG new user tutorial, but can be expanded upon if needed.

I’m going to break the series into posts, corresponding to the way they were broken up in the video series (Bindings & Things, Items & Links, Sitemaps & UIs, Rules, …) and continue to create new posts, as I create the associated documentation for them. Please use topic replies in each topic to comment on that specific section of the tutorial (correcting any errors or issues you may find) and I will update the main topic with any viable suggestions. 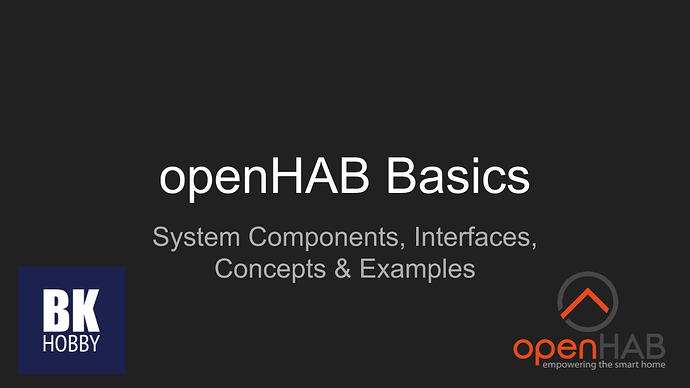 Now that we have an openHAB system set up, we need to talk about some of the nomenclature and the system components of openHAB, and we need to understand how these components work together. In this video, I will begin to introduce some of the basic building blocks of the openHAB configuration. There is a lot of information to cover, so I will split this up into smaller sections and give examples for each component, so you can follow along and try this on your own system. Hopefully that keeps the video flowing and it’s not boring to you. In the end, we’ll build a simple automation into the system I set up in previous videos, piece-by-piece, as I explain each topic and we’ll end up with a fully working system, that you can extend on your own.

So, let’s get started!

Bindings & Things [Concepts] This diagram shows a “big picture” of the basic openHAB configuration components. Even though it may seem complicated at first,I’ll explain each component one-by-one, and give examples so you understand what they do…Then, we’ll bring it all together with this slide again, showing a full path for controlling an automation device using openHAB. [Concepts%20(2)] We’ll start with the openHAB components shown in the “Object” section - these interact with actual hard…

8 Likes
How to get started (there is no step-by-step tutorial)
Directions for openHAB 3
How to get Digi XStick Working
rlkoshak (Rich Koshak) February 1, 2019, 8:25pm #2

Put links between the topics at the bottom of each posting so it’s easy for readers to navigate. I added a link to this post from the other thread.

I’m a little worried that the number of threads is going to get unruly, but we will see what we can do when it becomes a problem.

Perfect. A lot of your texts are already a good base for what can go into Paper UI NG. With a few adaptions to the new interface of course.

I’m also thinking about embedding YT videos in a collapsible section titled “Watch the video instead…” or so at the beginning of each tutorial page. I know at least one German Youtuber with an openHAB series and there are probably others for more languages. A link to the channel would be put under an embedded video in return.

I like to experiment with this idea, can I use your channel as test bed?

Awesome! I’m glad you think they’re a good base (I was hesitating posting them because they are a bit video-specific - they’re pretty much my reading script for the video introduction, before going “freestyle” on the actual show-and-tell portion of the video).

And, I have no problems with experimenting, as that is what I’m doing with my channel anyway - I have tons of topics on the “todo” list, many of them openHAB related, as this hobby is absolutely dominating all my other ones at this point

Coincidentally, I will be doing a live stream in <1 hour, about your previous contribution to openHAB (MQTT version 2 binding)! I hope to do it justice, as it’s a topic I’m still learning myself

@bartus thanks for the diligent work!

I’d like to create some Velbus & openHAB2 specific videos to help people get over the initial hurdles off linking the hardware to the software.

If they turn out okay, I’d also like to explore other bindings (that I use), for example @J-N-K DMX binding

May I put comments in your videos with links to these?

Sure! Looking forward to your videos, as I’ve slacked with mine