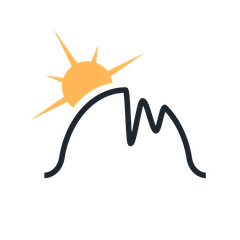 This binding provides data from Solar Forecast services. Use it to estimate your daily production, plan electric consumers like Electric Vehicle charging, heating or HVAC. Look ahead the next days in order to identify surplus / shortages in your energy planning.

You can start without any registration with forecast solar service providing a free public plan described in readme full example .

Add-ons for openHAB. Contribute to weymann/openhab-addons development by creating an account on GitHub.

Would love to test this. I’m on OpenHabian 3.3.0 - Release Build on a Pi4. So, should i just drop the jar-file in the /usr/share/openhab/addons/ dir, just as with other bindings that are not (yet) in the Marketplace? If so -and please forgive my ignorance-, what’s with the .kar file?

Honestly I don’t know the purpose of the 2 packaging formats but I think kar is the preferred one for openHAB.
If you don’t use the Marketplace installation either pick jar or kar and drop it into the mentioned /usr/share/openhab/addons/ folder and you’ll be fine!

Tnx for the reply, i’ll take it from the Marketplace then

Jar is for a standalone binding. Kar if you binding needs to be packaged with dependencies

Are you planning to integrate the Tuning-Function for Solcast? Here i am still using my nodeRED Flow atm.

Yes, test version is already running in my system and as soon as it’s stable enough on my side it’ll be part in an upcoming version update in the Marketplace.

Thanks Bernd for sharing this binding. I’m about to try it once being back from vacation

Happy, that you took the effort for simplifying this solar prediction stuff. I did something similar just by using the http binding getting the Solcast json and calculate the predicted solar production by a rule.

Your approach simplifies this a lot. And according to the other posts here and in other threads, there seems to be some demand for such a binding.

Mind raising a pull request for it to get it merged as official binding once you are convinced by your code’s maturity?

One additional thing: Would you add a channel for predicted “current solar power” which should provide the average power for the current time.

Example for Solcast (as they provide the prediction in 30 mins resolution):

Bonus: You could even interpolate values by considering last+current+next half hour to provide intermediate values as you already seem to do for some of your existing channels.

Thanks for this binding. I was already looking for a way to do some solar predictions.
Grabbing the json via http binding was offcourse also an option, but this simplifies the whole process.

Thanks very much for this binding - it has greatly simplified one of my setups, and allowed me to get rid of poorly written spaghetti-code rules!

One minor bit of feedback: in the README, at the Channels sections, the first column is called Channel. However, the values in these cells are not the Channel name - to derive the name one must remove the -channel from the cell value.

is not how this Channel should be referred to. It should just be

This confused me for a second when trying to create links in Items files from the Solcast Thing.

Note that the example at the end of the README is correct, omitting the -channel from the Channel names.

One additional thing: Would you add a channel for predicted “current solar power” which should provide the average power for the current time.

@curlyel
I think this is a good idea - looks pretty neat in the graph and can be used e.g. to calculate accuracy values using your pv inverter items. 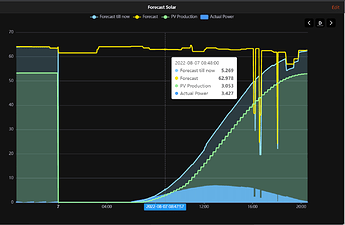 For those who already installed the binding: Things needs to be re-created otherwise the channel won’t appear.

@wars
Please check the Thing Actions from version 0.3. You can query kW values at any point of time. Also kW/h values can be queried between two timestamps.
Note: I needed one reboot after exchanging the bundle in addons folder to be able to access the Actions

@curlyel
I think this is a good idea - looks pretty neat in the graph and can be used e.g. to calculate accuracy values using your pv inverter items.

Perfect, exactly this was the intention while asking for it. Many thanks