Why can’t anything be easy… seriously.

This is home automation. If you wanted easy you picked the wrong hobby.

Is there anyplace that Z-Wave PC Controller app might be writing out logs?

Can you kick it off from CMD or PowerShell and see if it’s writing out something to standard out before it exits?

Without more information from the app I think we would all be just shooting in the dark.

Watch out for this. I bet you unplugged the USB while openHAB was still running, right? What happens is the Zwave binding gets a lock on the device. When you unplug the USB device the binding retains that lock preventing the file /dev/ttyACM0 from being reclaimed. When you plug it back in it sees that /dev/ttyACM0 is in use so it adds this “new” device as /dev/ttyACM1.

When you reboot your machine, the device will show back up at /dev/ttyACM0.

There are tutorials on the forum for creating a symlink for USB serial devices like this so the device will be linked to, for example /dev/zwave no matter which /dev/tty* the physical device shows up on. But I run in Docker and symlinks can’t be mounted into the container so I don’t have experience with this.

then I have to stop OH on the raspberry pi, unplug the dongle from the pi, plug the dongle into my workstation (which runs windows), and then run “Z-Wave PC controller”.

Hmmm, if you indeed did stop openHAB, perhaps something else is going on. What ever it is a reboot should clear it.

Do you happen to have any other USB devices plugged in?

Is there anyplace that Z-Wave PC Controller app might be writing out logs?

I’ve asked exactly that in the SiLabs forum. I got one response so far – not a helpful one.

Good thinking wrt console output… no luck, but good thinking nonetheless. I also tried to run it under windbg and saw that it’s throwing a CLR exception, typical of .NET applications but I couldn’t glean any more information than that. It’s definitely crashing, though. Perhaps it’s just a newer, unsupported firmware version in the newer UZB dongles?

Hmmm, if you indeed did stop openHAB, perhaps something else is going on. What ever it is a reboot should clear it.

The only other USB device is the SSD.

I’m still running my production setup on the primary controller – I don’t have a way of managing the Z-Wave network other than the Z-Wave PC Controller, so I can’t use the secondary controller yet.

If you wanted easy you picked the wrong hobby.

People talk about home automation being in its infancy, as if it will ever be a mainstream thing. I don’t think there’s a way in hell it can ever be, because most people don’t think like us. The average person simply doesn’t have the ideas like “wouldn’t it be nice to have a single button to turn off all my outside devices when I go inside”… They simply walk around and do it manually, and anything else is unnecessarily complicated and confusing. I think it will be always be a niche thing. Time may prove me wrong.

You were right, Chris! Thank you so much.

Z-Way does not require a license key to do a firmware upgrade. After updating to the latest firmware, Z-Wave PC controller runs just fine!

You do not need a Z-Way license to use it to upgrade the firmware of a UZB stick!

Make sure you don’t upgrade to “Bridge” firmware, stick with the normal type!

Posting this for people who find this thread in the future. Good luck!

Posting this for people who find this thread in the future.

I also have an UZB stick. But I thought so far that you can not backup the stick. I was thinking wrong!

Just to be sure and if I understood everything correctly, here are again your steps:

Now a few questions: Did you save your backup as .zip or .hex?

Did you once try to restore your backup to the same controller again?

If you have only one controller (like me), is it absolutely necessary to update to the latest firmware?
(I could imagine that “backup --> restore” to different controllers with different firmware would fail, so better having two controllers with exactly the same firmware…; So I’d better buy another controller.)

You got it exactly right, those are the exact steps.

The backup is HEX inside a ZIP file. It only takes a few seconds and the ZIP is 8 KB. This is very different from Aeotec’s app (see the original post in this thread) which saves a 512 KB BIN file and takes three minutes.

In fact, I was suspicious whether the NVM backup had done anything at all because it happened so quickly… so I restored it to the Tertiary UZB stick, which I had never used with Aeotec’ s app.
That tertiary stick is running my z-wave network now! So, it does work. I’m glad I bought three backups though and not just one.

I never tried restoring the backup to the same controller actually. I can do that, no problem. Will update this post shortly.

Even if you only have one controller, if your controller happens to have a version which the Z-Wave PC Controller application chokes on and crashes, you will definitely need to update. If you are worried about the firmware upgrade, you can do the following:

Then you can safely update the primary one with Z-Way because you already have a working backup.
I don’t know of any risk of using the Aeotec app but I have exactly one data point – i used it once and it worked that time.

I will do the back-up/restore and screenshots now, otherwise it will never get done. I wal going to do it on my primary (since the tertiary is running the network) but then I realized it’s probably not good for network health to have two cloned controllers running at the same time!

So I will stop openHAB and then I may as well do it on tertiary, and leave primary alone.

This is the Z-Wave PC controller 5.38 in the unconnected state. 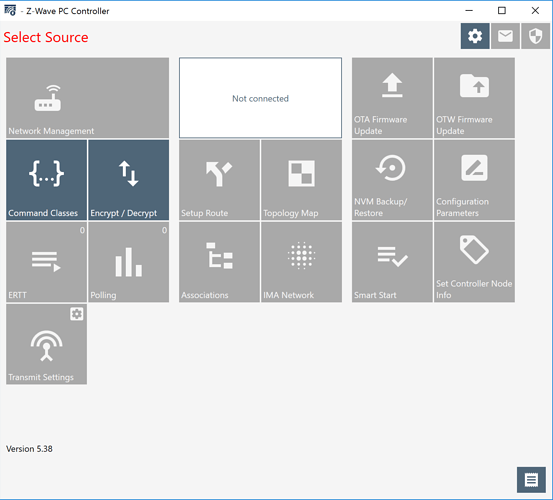 Hit the cog wheel in the top right and hit Refresh. If you don’t see your Z-Wave USB stick, you may need to apply the ZW050x USB VCP PC Driver (part of the zip file) to your Z-Wave USB stick in device manager to have it recognized. If you see the COM port, all you have to do is to highlight it in the list and press OK. Hopefully you’ll see the following screen. You may have to try a couple of times. 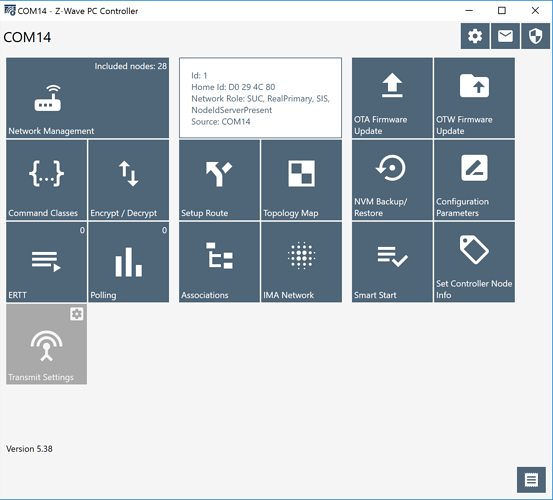 This is the Z-Wave PC Controller ready for duty. This is as bare metal as Z-Wave gets for most users. In “Network Management” you can include and exclude devices, turn lights on and off etc, but you better have your node IDs written down because they will not be named in this app.
I’ve used this to exclude failed devices, or even to exclude functioning devices when the Z-Wave binding had trouble doing it for me.

For backing up, what you need is NVM Backup and Restore. 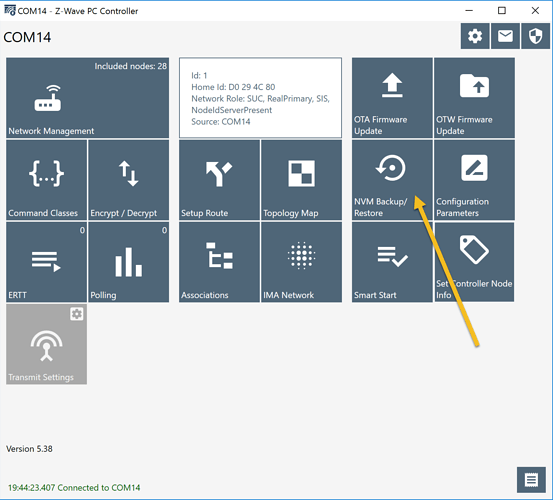 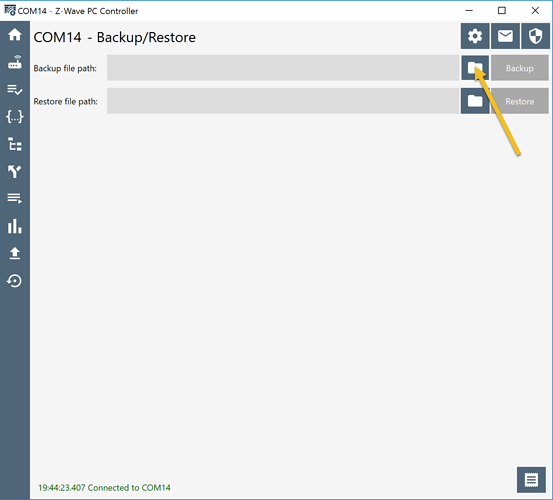 Select the location and the file name and press OK. Remember to hit Backup too!
Also, note that a backup is of no use if you can’t find it when you need it, so e-mail it to yourself, put it in your dropbox, do whatever you usually do with precious digital goods.

Restoring is done the same way except you pick the file into the restore slot and press restore instead.

When it’s done, it’ll say “NVM Restrore(sic) finished” and just sit there with a sliding progress bar. I waited for a couple of minutes, then I got bored of waiting, closed the app and disconnected the dongle.
That’s about it. 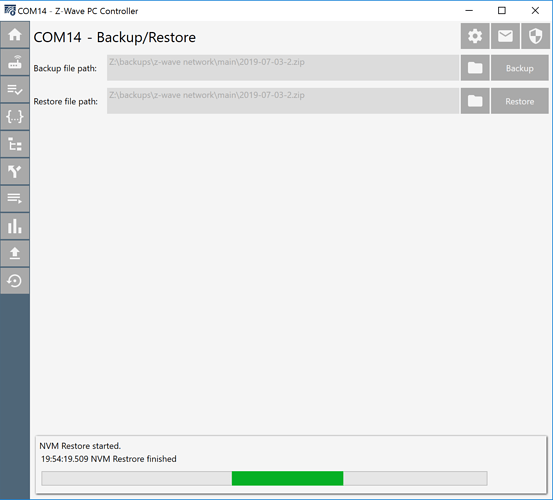 Here is a screen shot of the network management tool for posterity. 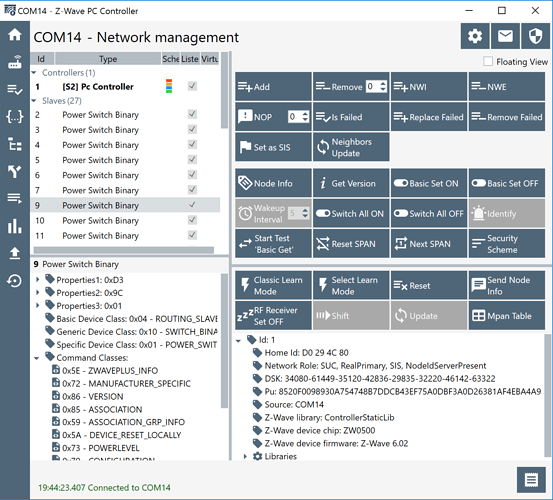 THANK YOU to Silicon Labs for releasing such a powerful tool free of charge!

The only other USB device is the SSD.

That wouldn’t show up as a /dev/tty* so that can’t be it.

You can take a small consolation in the fact that your posts and struggles are helping the community tremendously and are greatly appreciated!

One last question: Which “firmware version” do you use actually? Is 5.32 or 5.37 the latest? See here… (or is it not published on zwave.me site?)

EDIT: Maybe you could also provide such a screenshot (with content 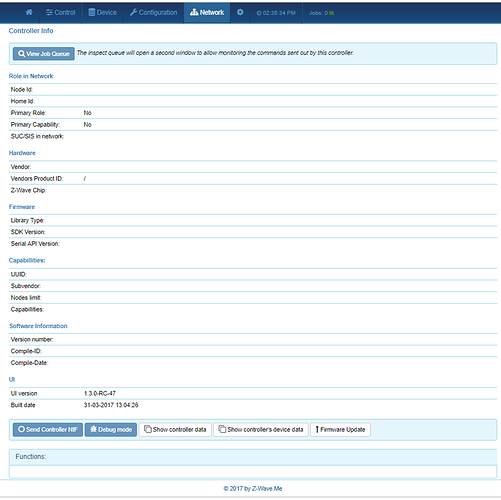 Is it possible to provide your firmware versions (as a file version): e.g. 5.32.zip or .hex

It’s not published on the site. I can’t remember the number at the moment but in Z-Way, on the Firmware Update page, there’s a box labeled “access token”. Enter “all” and you will see all available versions.
Please note that you may have to update more than once to get to the latest version! Make sure you don’t upgrade to “Bridge” firmware, stick with the normal type.

It’s not published on the site

Z-wave.me does not seem to be too specific about their release notes or information or documentation…

I can’t provide screenshots of the firmware update process because I didn’t take any, so I don’t have any. I did my firmware updates yesterday, today I’m doing something else :).

But I see the firmware update button right there in your screenshot. What are you having problems with?

But I see the firmware update button right there in your screenshot. What are you having problems with?

I’m not at home (atm), so no controller is connected (and then no updates are shown!). And it’s the “Z-Way on Windows” (=2.3.3) version. I don’t have a Linux system running atm. Before I make all the effort with a completely new Linux installation, I wanted to take a look at everything and try it in theory. Maybe it’s possible to use the “Z-Way Windows version (2.3.3)” and put the missing firmware updates in a specific folder to upload them.

It’s NOT possible to use Z-Way for Windows. It’s out of date, and will probably ruin your stick with impunity. If you don’t have a raspberry pi to run it on, I’d skip updating. Anyway, with a raspberry pi you don’t have to make a completely new windows installation, you just download an SD card image that someone else has already made, like Raspbian.

@leif Ok. I’ll try either Linux or something very different. I’ll inform you then. Thanks

I can’t provide screenshots of the firmware

I see, it seems to be too difficult to open Z-Way again, and doing steps 1-3? 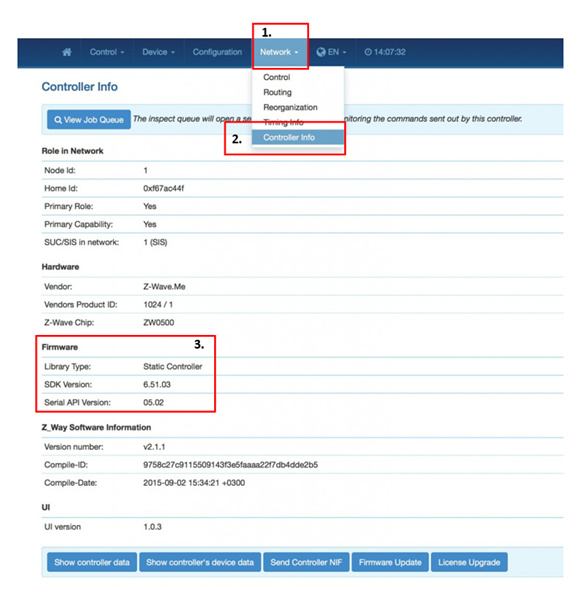 I had the same problems. But you can download it from the link above. See here in post 11.

I agree about the account – it wasn’t able to download it from their site either (although others have). I don’t remember exactly where I found it on the web, but I actually posted a direct link to it in post #10, right before the first picture.

Cool stuff ! Nice reminder to create such backups. I own a Z-Stick Gen 5, let’s see if it goes quicker with that.