Use case: In my setup (I have rather old but otherwise good TV with IR remote control, hooked up to a Yamaha YSP-2700 soundbar) getting from “I want to watch TV” to “TV actually running” typically took ~30 seconds, 2 very low-responsive and annoying remote controls and lots of buttons to be pressed. Not surprisingly, our household was not very happy with this.

Goal: “Alexa, start TV” should do all of this.

Hardware used: Raspi 3B+ running openHAB 3.3 and a Nivian NVS-SMARTIR-W2 IR blaster (which I bought on Amazon for ~16 € specifially for this).

I followed this great article on how to free the IR Blaster from Tuya and install Tasmota IR, to be able to control the IR blaster with openHAB.

Things that were not mentioned in the article / I had to figure out myself which might be helpful for others.

If the programming of the IR Blaster with Tasmota does not work, try…

In my case, my physical TV remote has only one button for on/off, which is rather cumbersome, because I’d want to have discreet commands for on or off to improve “fail-safe-ness” of my script. Thus I looked up the commands of my TV online.

What worked great for me: Searching for an existing command (the part shown in the “Data” block in the Tasmota console), since the Google hit typically links to a table with all the other commands in there as well.

You can test your commands by…

… everything works as expected, and the IR Blaster imitated the physical remote correctly (your TV should then also have done what the Remote did before).

Assuming that MQTT is already working on your openHAB installation (if not, here under #3 are some hints), the goal is to create an openHAB item to which you can send your IR commands (as test strings) via MQTT, which are then picked up and executed from Tasmota / the IR Blaster.

In addition to this openHAB item (to which the IR commands are being sent to), I also created an openHAB item where the WiFi status of the IR Blaster is being recorded (also as a good test for whether the connection is working).

Please also note that the topic of your Tasmota device (in my case IRBlaster) has to match whatever you have configured in Tasmota under “Configuration” → “MQTT Parameters” → “Topic”. 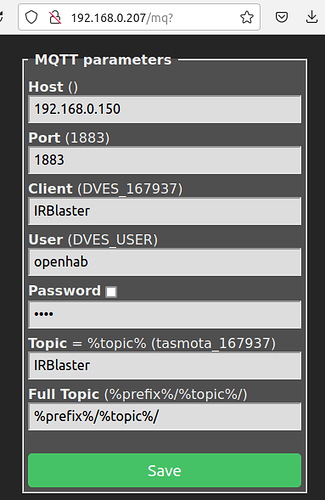 4. Execute the rule by Alexa

To be able to say “Alexa, switch on the TV” there appear to be multiple ways of doing it. I just used a “Custom Skills” as defined in the Alexa App. In short…

I only learned about all of this some days ago, so I’m not a pro. So in case there are errors in it or ways on how to do it better or easier, let me know.

From what I understood, there is also a non-MQTT-way of sending IR commands to the IR Blaster, by just sending them to the IR Blaster via http reqeusts. While the option described above (via MQTT) is probably way neater, it requires some experience with MQTT in openHAB. The http-request-option appears easier, but I did not find a way in blockly to actually send them. So if someone knows how to send http commands in blockly rules, the following has to be done to create them:

Oh man. This is why I love this community.
Excellent content, right here!