This widget displays the current state of your washing machine together with the time it has been running since the start of the washing. 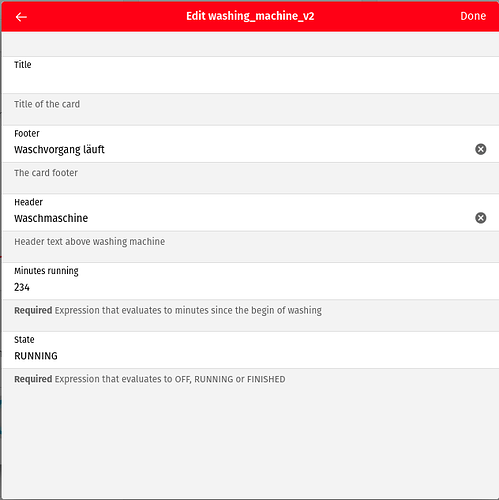 In case you are struggling with the “Minutes running” parameter I can show you how I solved this:

Why do I not set it to 0? This is because I determine the state from the average consumption over the last five minutes so my “Washing” state is detected too late anyway and I’m compensating a bit for that. However it is really not important to be super precise in that case (at least in my opinion). If you have a real smart device you may be able to use a better solution, I only use a Shelly Plug S to make my dumb machine “smart”.

Two questions from my side:

this is a fantastic widget. I adapted it also for my dishwasher

And made it display the running program. Anyway there is one thing I can’t get it to do: I’d like the whole widget to be clickable and do an action when clicked (in my case: show group). Any hints how to archive this?

Without having it tried the f7-card has an expandable property. This should make it behave like the automatically generated cards. This would probably be the easiest option. Would you mind sharing your adapted widget code here? Since my machine is not smart I cannot show any more information in the widget but I’m pretty sure others could and might find it useful.

Well the adaptation is quite small. But give me a moment to create a post out of those changes

As for the expandable property… I have no idea what you’re talking about. But that is probably my lack of understanding. Would it be possible to demonstrate something?

Ok but I would be interested in your dishwasher

I just tried that (added expandable: true under the f7-card config). It makes the card clickable and opens in a popup but it also changes the current layout. I haven’t worked with expandable cards yet so I don’t know what to do from here except of course reading the f7 documentation and searching the forums

Or maybe someone else has some more experience to share here.

Adaptation for a smart washing machine from Miele

I love the design of this widget, even beside the fact that I’m probably not able to create it myself so I adapted it for my smart washing machine which is included into OH by its own binding. I have information about the power state, running program, temperature and runtime/remaining time available. All those items were already created for a while so I could use my events.log file to tell which values I need to use.

I’ll describe the process below.

Step 1: state
I searched my logfile for the different states the machine goes through. In my case they were called a little differently and are translated to German: “Aus”, “In Betrieb” and “Ende”

Consequently I changed all occurences of OFF, RUNNING and FINISHED to those strings-

Step 3: header / Program step
I used the space above the machine to display the state of the program. What I worked around is that the Binding will report ‘UNDEF’ if no program is running. In that case nothing is displayed.

Other appliances
As it happens I use the same binding not only for my washing machine but also my dishwasher and sometime soon (whenever they deliver it) my dryer. So adapting the same process for a dishwasher and later the dryer is as easy as changing out the item names. Most of the program data is more or less the same. One change is that the dishwasher has one more ‘state’ (which I just ignore) and does not report a target temperature (so I don’t show it).

Future improvements
What I’m going to implement is a notification when the program was recently finished (and the machine is already off). Because that way you can tell from a quick glance if one of the appliances finished without you noticing.

Thanks. I guess I’ll look into it

Thank you for sharing details of your adaption. I would also prefer to show the remaining time but this is simply not possible with my dumb machine… But I use a notification as well which is more important anyway. The widget was just made to play around a bit

it is pretty simple to add an action to show a group in case of clicking the widget. Add this to your widget and define the group to show in the props.

I hope this is what you were searching for.

I was thinking about something like this as well but haven’t tried it. Looks good and very simple! Thank you for sharing

But in terms of designing something out of simple elements I’m quite… well bad.

Thanks @muelli1967! Works like a charm. I still don’t really understand where to put what, but it worked out

I’m happy to present you the latest addition to my widget collection: The dishwasher widget. The widget is designed to work together with my washing machine widget and thus reuses parts of the code. If you are already familiar with my washing machine widget then you already know how to use it. If not: Please see this thread for instructions: Washing machine status widget Here you can see the widget in action (Running, Off, Finished washing): [dishwasher] Happy dishwashing! 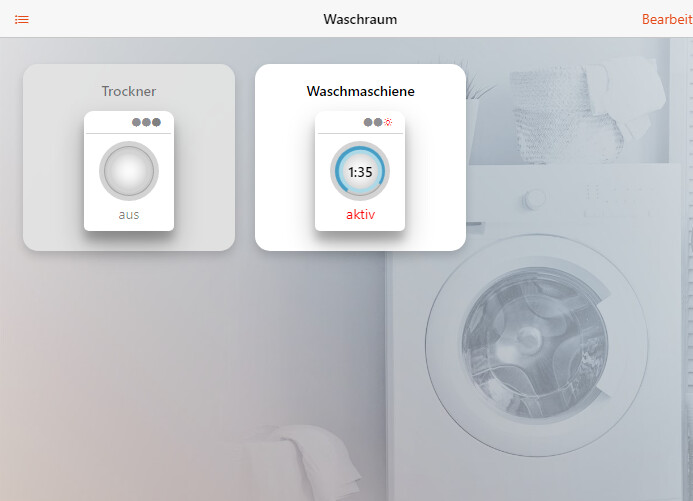 the widget is working nicely here. Thanks Thomas for your efforts and the clear explanations!

Can anyone tell me how to get the status of your washing machine in openHab ? Does anyone measures the used Ampere of the machine ? which kind of hardware ? thanks

Stefan mentioned that he owns a smart Miele machine. I own a dumb Miele machine and use a Shelly plug S that can measure the energy consumption of the attached device (I’m sure however there are lots of alternatives on the market). By analysing the typical energy usage during and after the washing you can figure out thresholds to determine when the machine is finished. In contrast to Stefan I can’t do any more than that but that’s in fact all I need.

Connecting the washing machine and dryer to a KNX actuator which can measure the current was one of the oversights in my installation. Now I am using switchable plugs from AVM, which are connected via Dect, this works fine.

To get the state I am using a openHAB rule with a simple state machine, based on the current. This needed some trying, to get the limits correct but now it is very reliable.