Detecting offline Things is important for me, because I want to know if, for example, the doorbell sensor is broken or the intruder alarm has lost its connection to openhab.

I currently use a stupid hacky Expect script to do this (see here). I’m looking at replacing this with something sensible given that, for some time, there’s been a way to read the status of a Thing in a rule, e.g.:

Only thing is, I have dozens of Things, and whilst I could write a separate line of code for each one, that seems even more stupid than my Expect script. Is there a way to do this neatly? There’s some example code here http://docs.openhab.org/concepts/things.html, but that’s for the console rather than for a rule.

OpenHAB3 / Thing Status / How to extract the thing status and work with it on items
How to get notified about offline (non communicating) Z-wave sensors?
Problem creating rule for MQTT
rlkoshak (Rich Koshak) September 26, 2017, 10:02pm #2

You could make a REST call using sendHttpGetRequest to get the list of Things in JSON format and parse and loop through the result to see which ones are online or offline.

I also believe there is a way to trigger a Rule when a Thing goes offline, though that would require you to add each Thing as a separate trigger to one rule or give each Thing its own rule.

Why don’t you use the expire binding and then only check for the NULL value?
You can also iterate over your whole items with the jsr223 rules very easily.

This is an interesting topic, and one that I have spent quite some time on pondering since I took my very first steps with OpenHAB several years ago…

To test the “internal monitoring” approach I have had the followig rule running for a while on one of my Z-Wave devices, and it seems to do the job:

I completetly agree that this is not a very elegant way to monitor the status of devices, at least if you have more than one,

A more conceptual problem with this approach is that I am using the home automation system to monitor itself - something I believe goes against the basic philosphy of system monitoring.

For this reason I am currently playing around with using the REST API, but not from the inside by using OpenHAB rules (as proposed by @rlkoshak above). Instead I am using an external component (a Python script) to monitor this from the outside.

The longtime goal is to feed this into some other monitoring solution, like e.g. Icinga or Nagios.

Why don’t you use the expire binding and then only check for the NULL value?

Another interesting approach that fits into my current mental exercise on this subject,

Granted, I am a bit biased since I am currently working with SCADA systems on the industrial automation scene, but I believe that to properly address this you first need to define your setup in terms of the process that your are monitoring and controlling (i.e. your house) and the system that you are using to monitor and controll the process (i.e. OpenHAB with various physical devices attached).

The control of the process (i.e. OpenHAB rules) should only care about whether the value (e.g. from a sensor) it needs to perform its task is valid or not. For this purpose the proposal from @spaceman_spiff is very well suited. If the value is different from NULL, then proceed. If the value is equal to NULL, then handle error condition.

Now, the next logical step is to monitor your system to make sure that it operates as intended (i.e. is able to control the process). For this purpose I think using the REST API is the best approach (at least with the current state of affairs). Again, in my view, and going with the philosophy of system monitoring in general, this should be done from the outside by a different system from the system that runs the process control.

I just want to clarify, because I am not sure everybody knows it.

This is the standard approach to monitor the status of a thing. Right?

But @dan12345 is right.
There should be an easier way instead of creating these two rules for every thing.
But then again, it is not that hard to copy&paste these rules for new things.

On top of my head I think linking a thingStatus to an (switch) item would be a possible dev solution? Then we would have the possibility to iterate on groups etc.

Thank you all for your suggestions.

The Expire binding/NULL error checking is a great idea, and I’ll go ahead and do that. Must make sense to combine with an external script that checks across all Things - my crappy Expect script already does that, although I’d be very interested to see something more sophisticated, e.g. in Python.

Why don’t you use the expire binding and then only check for the NULL value?

The main reason I didn’t recommend that to OP in the first place is because anything based on the Expire binding is going to require that the Item linked to the channel to receive an update or command on a regular schedule (e.g. always posts update once per hour whether there is a change in state or not). I wasn’t sure if all of the Things op was interested in do that and I didn’t want to waste time if they don’t.

For completeness, here is a generic approach that will work if the Items are periodically updated whether or not there is a change.

Look at the bottom of the top post for the Expire based example.

When one is using the MQTT binding (subscribe to the topics the device reports on and set the online switch to ON for any message) or devices that have a heartbeat channel (some ZWave devices, e.g zcombo smoke/co alarms) or online status channel (e.g. Nest) you don’t need most of the code in that example as the Expire binding handles everything but the reporting.

You can also iterate over your whole items with the jsr223 rules very easily.

But can you iterate over all the Things to get their status? That is the core of OP’s problem.

A more conceptual problem with this approach is that I am using the home automation system to monitor itself - something I believe goes against the basic philosphy of system monitoring.

I agree with this statement and OH itself really isn’t built that well to support this type of monitoring. However, often in a Rule one will want to do something different if OH can know that something is down so whatever system you are using needs to report this status to OH which kind of puts you back in the same situation of OH monitoring itself.

But I think of it like this. OH really isn’t monitoring itself in this case, it is monitoring the status of the actuators and sensors that it interacts with and their online status can be very important. I suppose it all depends on where do you draw the boundaries between OH and Not OH.

This is the standard approach to monitor the status of a thing. Right?

Just upgraded to 2.4, and ThingAction is no longer working.

This is my rule

This throws the error

Has anyone else seen this since upgrading to 2.4?

Afaik, you do not need to put ThingAction. in front - it should work without it. Could you try?

Just found that. Another breaking change.
Been fighting them for 4 days since the upgrade, quite a lot in 2.4.

Thanks for the link, I was having a hard time finding a list of breaking changes in 2.4.

I also believe there is a way to trigger a Rule when a Thing goes offline, though that would require you to add each Thing as a separate trigger to one rule or give each Thing its own rule.

Thanks for inspiring me with this discussion! I added some Thing monitoring to my rules and optimized logging to suppress some unavailable or unhelpful strings from getThingStatusInfo():

I agree with @rlkoshak that adding a rule for each Thing is suboptimal.
It would be easier if something like triggeringItem exists for Things as you may find in this non-working example:

Would it make sense to open an issue for this?

Would it make sense to open an issue for this?

The new rule engine handles this, so IMO it is doubtful much effort would go into adding features to the old rule engine, but you never know!

It would be easier if something like triggeringItem exists for Things

hmmm…I was warned to revive the topic after one year, but I think it might be quite of interest and want to contribute a solution that was not mentioned here before (I hope) and did do the trick for me.
I dont want to really monitor all my things but for sure also not create a rule for every single thing. But creating an item to hold the status for every thing I want to monitor seemed ok for me. So I use http binding with REST API and very simply created an item:

You can have than a rule for gOnline group changed if you want to alert getting the triggering item.
You could do some more transform in JS to use a switch item (having JS return ON/OFF)
You can also do more transform in JS to get more out of the Json returned by the REST api (thing label or thing UID…)
And through http binding you can obviously set the timing how often you want to check the thing.
And also nice in my experience: You can monitor via persistance (using Grafana or similar)

I can contribute something for all the HABApp users, too.
HABApp listens to the Thing events and it is really easy to trigger on a change of the status.

Sorry for my ignorance, but what is HABApp? Cannot find anything in the docs … 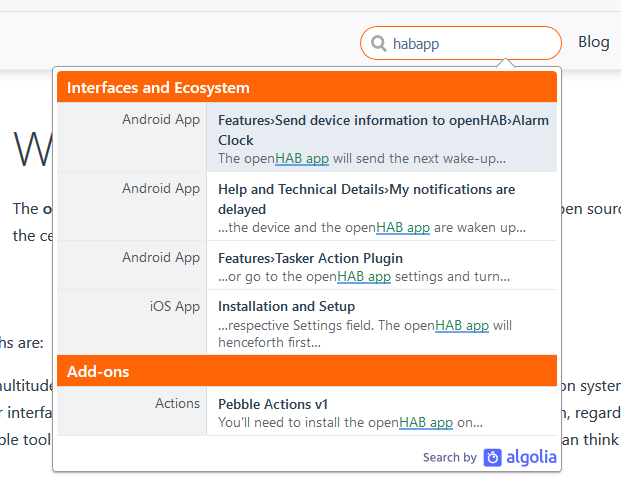 Python3 Rule engine which you can easily spin up next to openhab, normally I link it but I guess I forgot:

Hello, since I started with it has always been puzzling to me how hard it is to write automation rules in openHAB. Things got a little bit better with the jsr223 integration and I think @steve1 contributed some great ideas. But with openHAB2 and the new API things got worse again and unfortunately even after long hours I did not manage to migrate my jython rules. Also jython has lots of drawbacks and is syntactically python2. I even tried HomeAssistant because and even though it has lots of …

I’m not an expert in JS, so can you please give some tips about how to do that? I assume you would add a script to the rest api url?

I tried and what should work is :
Define item as switch with http binding and transform JS:
Switch OnlineAstroMoon2 "Online AstroMoon [%s]" (gOnline) { http="<[http://localhost:8080/rest/things/astro:moon:gg:30000:JS(online.js)]"}

Then in your transform directory you create a fiel “online.js” which should contain: