The latest distro #633 comes again with some changes that I would like to mention:

The most visible change is the new option to select the initial package. You will see that newly installed distros now do not set a package in addons.cfg anymore. If the user leaves it like this and starts the runtime, he will be presented this setup page instead of the dashboard in his browser: 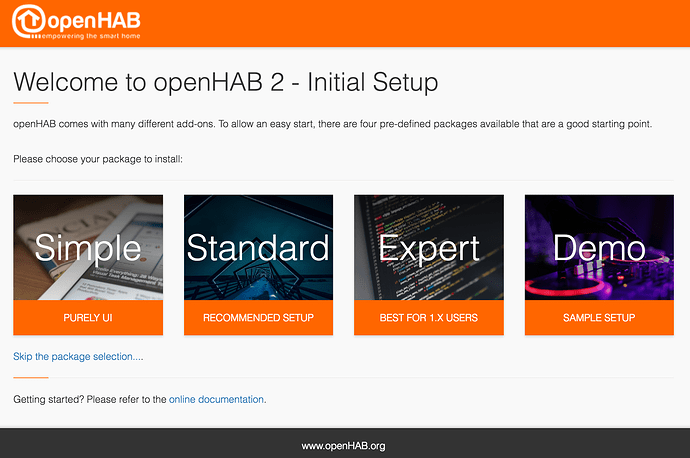 This is imho again a great step forward to make it easier to get started. Having to find the file conf/services/addons.cfg and edit it before the first startup, wasn’t really too user friendly.

Another important change that was done: The add-on ids of all openHAB 1 add-ons are now suffixed with a “1”, just like it was already the case for the legacy bindings. This means that you now e.g. have to set “binding=nest1” instead of “binding=nest” in your addons.cfg, so this is a breaking change that you must be aware of as otherwise your add-ons will be uninstalled when upgrading. This change was done to prevent any future changes like it would be the case if an OH2 version of the Nest binding appears - in such cases we renamed the OH1 version in the past, which now won’t be necessary anymore, so we are much more future-proof now.

And as always, there were quite some fixes and enhancements in ESH that went into this distro -
please report back in case you see any new bugs or regressions from this.

You are right, distro #633 also added the 1 for persistence services, but I built #634 a few hours after, which reverted it to just “mapdb” again in order to avoid too many problems.

@Kai We can still use addons.cfg to specify the bindings to install as part of the snapshot correct?

I just upgraded to this build and the system initialized in a very strange state. It initially had the version 2 bindings (such as Paper, HABMin, HABPanel, Zwave installed), but while it was running it uninstalled Zwave, PaperUI, and other many others (I got the notifications while in PaperUI).

Perhaps I should start another thread about this but when it finally stabilized it lost all the thing/item config for version 2 items – that’s never happened to me before. Perhaps related to the folder structure changes?

All, I feel sorry to tell you that the distro build #624 brings another breaking change, but as in the past, I am certain that it is for the better! There has been a long discussion around the problem that the Things that are created through the Paper UI are stored in a binary database (the mapdb, data to be found under userdata/mapdb), which is not readable or manually editable (e.g. for fixing or cleaning). @chris came up with a nice new implementation of a storage service (luckily, ESH is…

Thanks @sihui – I missed that change.

which reverted it to just “mapdb” again in order to avoid too many problems.

Hmmm, in the build from yesterday it is mapdb1 again …btw, where do we find the build version number since

is closed? It does not show the version number in the karaf console as before and the file branding.properties is gone.

Another one: all 1.9 actions don’t seem to have the “1” suffix. Pushover action installed fine with “pushover” in the addons.cfg.

The single source of (latest) truth is here. The 1-suffix is ONLY added to bindings, not to actions and persistence services.

And as always, there were quite some fixes and enhancements in ESH that went into this distro - please report back in case you see any new bugs or regressions from this.

As far as I can read one of the enhancements is that security is now enabled. That is great - actually one of the last things i was waiting for :-). But how can I enable it?
I found a user config which seems to have some user / password stored in OH1 style. Since it seemed to be enabled and I can logon without password, there might be another place. But where?

As far as I can read one of the enhancements is that security is now enabled.

Unfortunately not yet. This is just a first step towards it. See my comment here. If there is anyone who wants to look at the next steps, please speak up as I don’t know if and when I will find the time.

Hi Kai,
Thanks for the quick reply. Actually I am not in a hurry. Since my OH1 Install works just fine. MQTT does the job of connecting my OH2 to OH1.