UPDATE 2019-08-13 A fix has been applied to address the incorrect day issue. (Thanks to fifipil909). Please download the updated owm.controller.js file, and replace it. Only necessary in existing installations, new copies will have the new version.

I have forked my previous Weatherunderground widget to support the OpenWeatherMap binding. This widget can be used with the free API key! 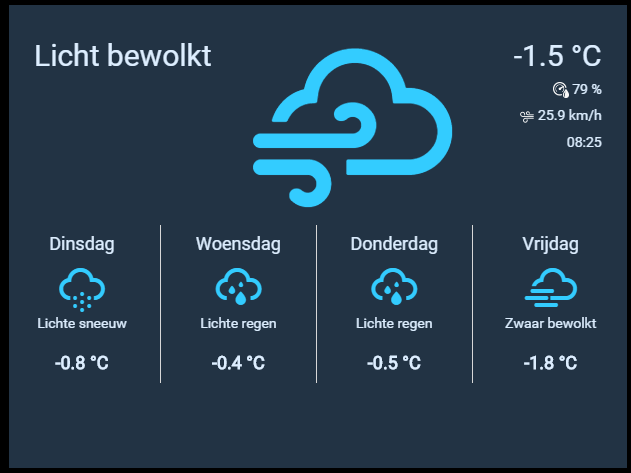 Items, dont forget to replace the id with your ’ Local weather and forecast’ thing id:

Instructions to install are on the github page.

All the best,
Bastiaan

One possible suggestion - could we have the ability to reuse existing items (e.g. in “Advanced” configuration tab) rather than having to create these specific ones? Not a big deal, I just added them to my OWM items file, but I feel li’d be nice to have that flexibility.

On order to accomplish that, all items need to become a setting in the widget. There are about 20 items to be set there. Doing it via a pre-configured set of items is easier and less mistakes can be made. The widget needs extra code to verify each items data to ensure it will work. Therefore, an easy request is not so easy to implement.

Great - I just added your widget successfully to my habpanel!

One point took me a few minutes to find: I had to change the list of items a little bit; change of all the Hex codes within the channel definition (…weather-and-forecast:2fd1295b:…) was required. I already had the OpenWeather binding installed before; maybe this is the reason…

Last question: I am still waiting for Humidity and Wind Speed to appear within the widged; currently both are only “N/A”. I linked both channels to two additional items using PaperUI; both items are displayed ate PaperUI/Control with proper numbers. I am using Openhab 2.4.

I completely understand, was only a potential suggestion, and it’s really easy to just copy/paste the items you’ve conveniently defined for us

One point took me a few minutes to find: I had to change the list of items a little bit; change of all the Hex codes within the channel definition (…weather-and-forecast:2fd1295b:…) was required. I already had the OpenWeather binding installed before; maybe this is the reason…

Yup, everybody needs to change that id to match to their own. I will update the steps to make that more clear.

Last question: I am still waiting for Humidity and Wind Speed to appear within the widged; currently both are only “N/A”. I linked both channels to two additional items using PaperUI; both items are displayed ate PaperUI/Control with proper numbers. I am using Openhab 2.4.

OK - I sort of have it working, but there are a couple of problems…

There is also a global unit declaration I guess, but I can’t figure out where to put that either.

Also, the temperatures are displaying with 2 decimal places, and I can’t seem to fix this (I want no decimals). 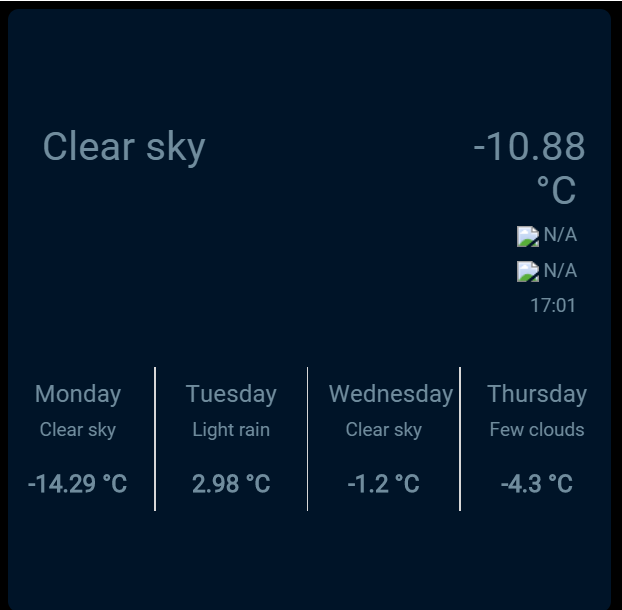 I also found that when I try to display this widget on an iPad t the forecast doesn’t work right - it stacks them vertically rather than horizontally. It displays properly on my Windows 10 PC, but not on the iPad. Any ideas?

EDIT: Icons are working now (it was a permission issue)

it looks like humidity and wind speed refer to the “old” items, without the OWM in the item name…

I have corrected the item names of windspeed and humidity. And I’ve set the temperature decimals forced to 1. Please download the updated widget from the github page.

Hi,
I started myself with a widget for the OMW free api, but I gave up when it came to correct ordering of the forecasts.
My problem was that if i look now at the forecast24 items they show something different than when I look at them this evening at 10 o’clock.
So it wasn’t sufficient for me because I’m not interested how the weather will be tomorrow evening at 10 o’clock, I want to know how it will be tomorrow morning or whenever.
Did you solve this somehow?

Nope, it has this exact same limitation. I do however considering implementing some logic to show the weather @ noon 12.00 of each day.

I found it less problematic because summing a full day in a single condition where everything could happen to the weather is rather usefull from the beginning, right? It just looks nice and gives so some form of indication.

Any thoughts on my issues listed above? How can I get fahrenheit? Why is it displaying wrong on an iPad?

The items follow the unit settings of OH. You should set your ‘Regional Settings’ as described in the steps.

OK - it does have to do with screen size, but reducing the icon size or increasing the widget size won’t help (I’ve tried the smallest icon size and a full width widget).

You json code uses “col-md-xx” (md stands for medium) for your column spacing, which allows horizontal layout only on devices with 768px or more in width, and forces a vertical layout on anything with less than 768px. The iPad2 I’m using reportedly has a 1024x768 resolution and I’m using it in portrait mode. But as it turns out the browser is interpreting this as not being a medium size screen, so it’s forced into a vertical layout.

Changing all of the “col-md-xx” designations in your code to “col-sm-xx” fixes the issue with no impact to devices with larger displays.

Hi,
great job, great widget. I have 1 question and 1 problem:

Problem:
the icons are only shown for 48 and 72 hour forecast, but not the current weather and forecast of 3 and 24 hours.
When I view the items in PaperUI, all icons are show correct 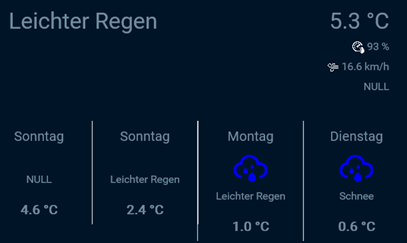 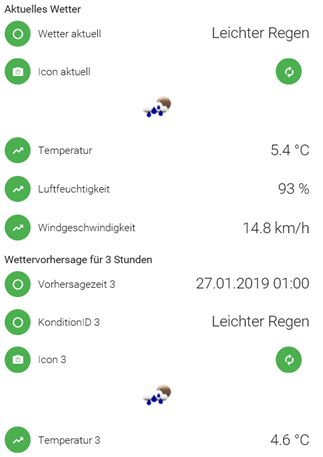 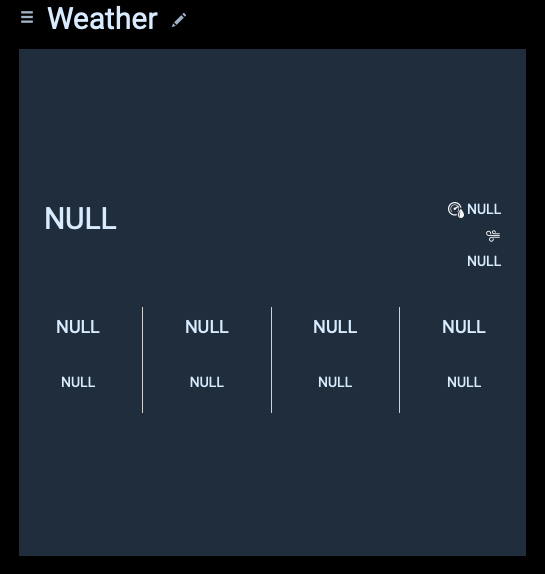 ok try not to laugh at the noobe, but where is this configuration file that i put my things id located?

where do i find my thing id?

in my list of things in paper ui it says… openweathermap:weather-and-forecast:33d4f43f

so does this look right?

In reply to your question: When I have the time, I will try to make the 12:00 o-clock logic into the widget.

For the missing icons, the widget is not using the ‘icon’ channels as it has ugly icons. Instead it uses the ‘condition-id’, which is an integer and gets the corresponding icon from the ‘weather icons’.

I see you have more NULL’s, so could be your items aren’t setup right.

As described in the steps:

Go to your ‘Local weather and forecast’ thing and note the id which is wrapped in all of the channels:
openweathermap:weather-and-forecast:**2fd1295b**:local:station#id