This is a example thread to show how the exec binding 2.x works with detailed explanations.

I set up a fresh installation of “Raspbian GNU/Linux 9 (stretch)” and installed OpenHAB just followed my own thread and found some more information i missed at the first time. It is based on the Tutorial from here.

First make sure you connect your transmitter with the Raspberry like follows. Have a look at the RPI pinout.

As RPi_utils send uses wiringpi make sure it is installed.

If this does not work install wiringpi as described by Gordons Projects. Or use apt-get system as described in the wiringPi package

Now we need some executable program which controls the transmitter. We can use the RPi_utils send for that. It has to be fetch from the git repo and build, if you change the directory make sure you do it everywhere.

Sidenote: If you encounter this error

Got to the root of the project :~/src/433Utils/ initialize the depending submodules and update them.

This is the remote which is delivered with the power plugs, it can control 4 devices A, B, C, D.

Try sending a command to your device with ./send <Address> <Device Number> <On/Off>.

Now the user privileges for openhab has to be set.
Add openhab to the usergroup gpio so it is allowed to acces the gpio of the RPI and then try to use the send command as user openhab. This line expects the terminal to be in the folder containing src.

Then the exec Binding and regex transformation have to be installed i use the Karaf console.

Now everything should be ready for setting up the OpenHAB UI.
I recommend that you had allready opened the UI of OpenHAB once before configuring the basic UI, which this tutorial explains. Try to open it in your browser, edit localhost to the IP of you RPI if you open the page from an other device.

Back to the shell we start with a thing to connect to the exec binding. This will contain the command without or with parts of the arguments. This file will be at “/etc/openhab2/things/exec.things”. I called it “exec” like the binding.

To connect the thing to the switch on the sitemap we need items. They are located at “/etc/openhab2/items/powerplugs.items”

To have an visual representation of our switch we need an sitemap. This is located at “/etc/openhab2/sitemaps/powerplugs.sitemap” and has to be named same as the sitemap, here “powerplugs”.

This is explained in detail in the tutorials. Major detail is “item=Power_Plug_Socket_X” this connects the UI to the switch item which was defined previously.

Last thing to do is defining some rules which triggers desired actions. The rules are located at “/etc/openhab2/rules/powerplugs.rules”.

This Rule only works since openHAB 2.3.0 Build #1212. Before that the Member of trigger was not availabel.

Try to open the page to display the switches, access it via following command, edit localhost to the IP of your RPI if you open the page from an other device.

Additional:
Logging can be done with

A side note: in the the OpenHab terminal the items can be listet with the command “smarthome:items”.

Thank you @rlkoshak and @steve1 for your assistance. Hopefully this helps others understand how things work.
Also @twolthaus and @domeninini for pointing out minor typos and privilege specification wich leaded me to the group permissions for the openhab user and the gpio, which is the best solution i could think of, in place of root for openhab.

After i edited the items and rules for all 3 GUI switches i had this error. Restarting the RPI got it runningn

You forgot to install the regex transformation service.

LED Stripes
Additionally i post my solution for some LEDs stripes.

This is the LED controller and the RF remote. 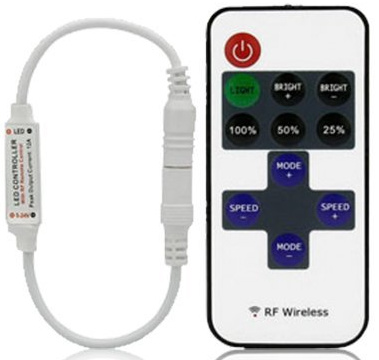 I decoded the commands which the remote sends with RFSniffer from 433Utils which also contains send and sendcode to controll the transceiver.

So getting it done is then straight forward, just add a thing, items, a sitemap and a rule to controll the LED stripe.

ledStripe.rules
This Rule only works since openHAB 2.3.0 Build #1212. Before that the Member of trigger was not availabel.

For more funny stuff have a look here:

So i don’t know your setting and rule but ussually the item receiving the command do not change mutliple times. Use a rule which reacts on changed this wil prevent the rule to trigger multiple times. So when you have a item which collects teh RF data use a rule that distributes the recieved commands to different sensor items your problem should not occur. String MQTT_data "MQTT stest says: [%s]" {mqtt="<[mymosquitto:433MHz:state:default]"} Group RfSensors String MQTT_sensor_1 (RfSensors) Strin…

Understanding explaind. I will test this when finding a secondary SD-Card. Good Job

Fantastic tutorial! Thank you for contributing to the community.

I tried the tutorial and it works well !
For those of you who want to add more than just one sockets, you only have to add

in the items-file and replace the “_x” with a unique name. Further, add

in the sitemap-file and again, replace the “_x” with a arbitrary but unique name.

The rule I copied 1:1 but replaced the names again.

@Josar Could you please implement a group, which is able to switch all those sockets at once ?

@domeninini I added some more information to the tutorial maybe you schould read it carefully.

Hy. I hope I find help here. I’ve been trying to use a 433 mhz module for a long time with openhab.
I can use it in the shell with the following command: /home/openhabian/433Utils/RPi_utils/./codesend 13108705.

And now I try desperately to integrate this command with exec binding (version 2). I hope who can help, I try to send the command as a push button.
Where is my mistake? Post my composition. Thank you

Hy. I hope I find help here. I’ve been trying to use a 433 mhz module for a long time with openhab. I can use it in the shell with the following command: /home/openhabian/433Utils/RPi_utils/./codesend 13108705. And now I try desperately to integrate this command with exec binding (version 2). I hope who can help, I try to send the command as a push button. Where is my mistake? Post my composition. Thank you .items Group Licht_EG "Licht" Switch Wohnzimmer_Decke (Licht_EG) [ "Switchable" ] …

Make sure to add openhab/openhabian to the group which is necessary to execute your commands. Most probably gpio. I don’t know what kind off 433MHz transciever you use.

Second you don’t need the shell Skript. Put your call to codesend in the thing as explained above in the tutorial. Have a closer look there.

Thank you . I will try this tomorow

Hy.
Have everything rebuilt now, it still not works. Where can my mistake lie.

etc/sudoers file edited with visudo , I hope the entries are correct.

i hope you can help me.Thank you

Can you execute the command from commandline as user openhabian?

Why do you fiddle with sudoers?
Did you add openhabian to the gpio group?

What do you try to achieve here? Wohnzimmer ist a switch which can be on or off. Not a string.

Please try to follow the instructions step by step.

Please remove all other stuff, as there are errors listet in the log which obviously contains data which is not listet here, which has errors.

And please use the preview to make sure the formating is properly, also or even more when copy pasting.

Sometimes/often it helps to restart the rpi when the files are changed a lot.

There are situations where you want to use the Exec Binding to trigger something. Sometimes you need the sudo privilege to do this. I would rather try some group specification to reduce the user rights to a minimum, but here is how i got openHAB to be able to execute sudo. Try executing a command as openhab sudo -u openhab sudo -l We trust you have received the usual lecture from the local System Administrator. It usually boils down to these three things: #1) Respect the privacy of other…

thank you very much for this tutorial. Everything works now and I´m very happy!

As I started with the “automatic” Installation by openhabian, I had a few things, that confused me. Perhaps someone else helps this out.

I was confused, in which Directory I should install the raspberry-remote, so I installed it in “/home/openhabian/” - which I guessed right - as I learned later

As I had installed the raspberry-remote i got a error:

so i figured out, that i have to install wiringPi first.

I upgraded my Raspberry with

and Installed wiringPi in my “raspberry-remote” directory with

After finishing this, i switched back in my raspberry-remote directory and now i could use

Thank you again for your hard work and this Tutorial! Now as Christmas is over, i´ll have to find some other Things, that i will switch on and off in the meantime

@Lucky i think this should also work for installing wiringpi:

But thank you for the hint for all who are using openhabian.

openhab / openhabian have always been users of gpio

I just want to send the radio command (13108705 decimalcode) as a push button. I control radio modules that I integrate into my light circuit (surge circuit). as easy as it is possible I do not want to prove if it is on or off. if I press in openhab on the switch it should send once the radio command.

works without problems the wireless module, but in the log, nothing appears.

get the following errors when pressing the switch.

What else can you change about the rule? you’re great thanks for everything so far.

I use postUpdate, this does not trigger the rule.
But I did not test it.

But the problem is if the argument stays the same the command will not be triggered.

If the thing is used by multiple rules it es advised to first check if item is active.

Video is not available.

I’ve done a video update! I have replaced the rule with the new one, but it does not change, send command only at the first time i push the button (look at the video).
The things are only used by this one rule, so far I have only this one configuration.
Thank you

@antihero00 I had some time to test it. This is the best solution i could find so far.

set the thing autorun to false.

in the rule manually trigger the execution.

This works for me and executes the command everytime.

Some sidenotes.
If the reseting is done with sendCommand instead of postUpdate it will also work, but it will trigger an execution which is not a good idea.

Josar you are my hero, it works fine. Thank you .

Hi Josar,
great tutorial. Tried it on a Raspberry Pi 3 with OpenHAB2. Followed exactly your steps. But I get the “An exception occurred while formatting the command line with the current time and input values : 'Format specifier ‘%2$s’” but as I’m quite new to OpenHAB, I don’t know how to handle your explanation to this error. Can you give me some newbe step-by-step advice?

Many thanks and best regards
Muhackl